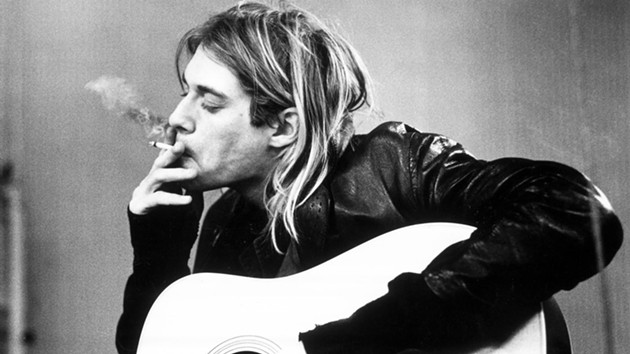 On Saturday, the world will once again mourn the loss of Kurt Cobain: tomorrow, February 20th, would have been his 49th birthday. Without a doubt, the Nirvana frontman is one of the most influential and legendary figures in the history of rock music. In a few short years (roughly five), he made his Seattle garage band one of the biggest fucking rock bands on the earth. Deeply depressive, introverted and slightly paranoid, Cobain's meteoric success accelerated his mental disturbances and drug addictions. On April 8, 1994, his body was discovered in a shed outside of his home in east-central Seattle. He died by an apparent suicide. To this day, speculation surrounds the circumstances of his death, including that his widow Courtney Love was involved (the 2015 doc, Montage of Heck, subtly undermines these claims, while others reassert them). More likely than all the conspiracy theories is that no one wants to accept that we lost him.

Of course, in some ways we haven't. Three albums—Bleach in 1989, Nevermind in 1991 and In Utero in 1993—have the eternal life that Cobain did not. These three studio albums, legendary live footage, videos and archives will live forever in every musician to follow him. Nirvana instantly changed the musical landscape. The world was obsessed (and still is) with Cobain's grungey dark music, and his troubled inner life was both a comfort and a mystery. As Pete Townshed said in 2002, Cobain was "once beautiful, then pathetic, lost and heroically stupid." I asked Halifax musicians to share his impact and influence with The Coast. Happy birthday Kurt.


NATHAN DOUCET (Heaven for Real, ex-Crosss)
This guy changed my life, for sure. It pains me to know this now, 'cause he was such an idiot, but I was seriously considering taking a back-seat with drumming and I was already exercising a malaise about it until my dad (Kevin Doucet) brought home Nevermind. We put it on in the car and my brain expanded immediately. I had been listening to Neil Young and The Ramones and I was starting to get into rap, all of which were inspiring in their own way, but this was pretty much exactly what I needed. After this, I started my first bands, a mode that would (for better or worse) never stop. Fuck, I mean, Crosss sounded A LOT like Nirvana (LOL).

RICH AUCOIN (Rich Aucoin)
For me, the thing I always liked about Cobain was his sensitivity and appreciation for melody, especially in a movement that was filled with much testosterone and similar sounding chord progressions, and which emphasized this new "alternative" style of songwriting.

STEPHANIE JOHNS (Moon, Arts Editor at The Coast)
Growing up in Bedford (and not knowing what the internet was) I didn't get to see a lot of guys wearing dresses and talking about feminism and equal rights. Strange to say that my introduction to feminism was from a white dude on MuchMusic but there it is.

CHAD PECK (Kestrels, Noyes Records)
Nirvana did for me what hardcore did for a lot of my friends: Made the start-a-band pipe dream seem completely within reach. I spent much of ages 13 and 14 learning every note on Nirvana records. I would not own an electric guitar if it hadn't been for Kurt Cobain, and the notion of turning on the distortion pedal for the chorus is ingrained in me for good thanks to Nirvana.

TARA THORNE (Dance Movie, Copy-Editor at The Coast)
Did Courtney Love kill Kurt Cobain? No. But. BUT. In Kurt & Courtney, they interview a total nut job, El Duce (a hitman), who is killed by a train a few days later. What able-bodied person is hit by a train at random? No one. But a DEAD BODY could be. Just saying.


JOHN MULLANE (In-Flight Safety)
Driving around Moncton with the older kids in a 1990 Chevy Cavalier. Someone clicks in a tape. I hear the opening of “Smells Like Teen Spirit” for the first time. I can't even process it. For a bunch of wayward young music fans (we listened to everything: Salt n Pepa, REM, Metallica, Young MC) but Nirvana changed everything. It was tribal; we finally had our very own tribe. It changed our devotion to music. Now we had Cobain.

JON MCKIEL (Jon Mckiel, Cousins)
If I could relay any anecdote about Kurt Cobain at all, I’d say getting Nevermind in seventh grade and then hearing “Territorial Pissings." It was insane. I’d never heard that kind of music before and it really opened it up for me.

TIFFANY NAUGLER (Noisography)
I actually found a copy of In Utero on a cabinet shelf in my Sunday school class, along with a bunch of other stuff that previous instructors had confiscated. I was curious and lifted it for myself. When I got it home and listened to it, I was impressed. I'd grown up in a house full of country and pop singers and had never really heard music like it before. Kurt's voice was so raw. I listened to "Heart Shaped Box" over and over until the tape wore out. I never really became a die-hard Nirvana fan, but I definitely credit Cobain for my love of dark, gritty vocals.

MIKE RYAN (The Town Heroes)
The first time I heard Nirvana it made me feel like I’d been missing something important in my life up until that point in time. It filled in a part inside of me that I didn’t realize was vacant. To a kid growing up in small town Cape Breton and just learning to play guitar, it was an awakening of sorts. It made perfect sense to me, it was exactly what I needed.

JORDAN MUPRHY (Walrus)
Kurt wrote perfect pop songs. We still listen to them all the time.


KAYLA STEVENS (Vulva Culture, Crossed Wires)
I feel that Kurt had a lot of influence on a lot of musicians, including myself. Seeing someone who was considered more of a shy, introverted person but still getting up in front of people, playing really loud guitar is something I found really inspiring since I was pretty young.

KURT INDER (Kurt Inder)
His name was Kurt so he had that going for him. It’s a shame he's no longer with us because he was very smart! And he was an inspiration to a lot of people. I wish he was still alive because he would look super cool by now. I hope he has a beautiful birthday.

MATT GRACE (Outtacontroller)
Nirvana was one of the first bands I became full-blown obsessed with when I was discovering music. Kurt was always open about his influences and made discovering bands like The Wipers and Black Flag a reality in a pre-Google world. It made playing music seem like a possibility.

TERRY A’HEARN (Outtacontroller)
Nirvana was a huge influence on our young lives. Most musicians our age could probably say the same. The great thing about Cobain's music is that it still holds up today, still influencing new generations of loud, energetic and honest bands.

BRIAN JONES (Orchid’s Curse)
If it wasn't for Nirvana, I probably wouldn't be a musician. They got me into playing music, and still influence my songwriting today. I remember the first song I ever played live with my junior high school band was “Rape Me” (and probably in front of the wrong crowd, not to mention). Kurt Cobain was a great songwriter. The songs were simple verse-chorus-verse songs, but he had the hooks and the voice that stuck in your head. There are very few that can write songs that can influence an entire generation of people, but he was one of them. Here's a picture of my tattoo.

DAVE SEARS (Nirvana tribute: Endless, Nameless)
Nevermind and Core (Stone Temple Pilots) were the first records that I bought on my own, that came out in my lifetime, and it wasn't like anything that my parents and older people were listening to. It was something that was mine and they didn't get it and that made it more special. Like Joe Strummer said, “Hearing that noise was my first ever feeling.” Every now and then we like to thank Kurt, Dave Grohl and Krist Novoselic publicly with Endless, Nameless. My favourite songs: “Frances Farmer,” “Drain You,” “Aneurysm,” “Lithium,” “Very Ape." It goes on.

DEXTER OUTHIT (Barlow, Negative Rage)
Nirvana really blurred the lines of genre for me in my early adolescence. I hadn't yet been exposed to a band that weaved through melody and aggression so organically. That influence has resonated with me ever since. (Kurt Cobain) is my dude, forever and always.

PALMER JAMIESON (beauts)
I first heard Nirvana in 1994 (the year he died). I was six and my mom took the tape away from me when she heard it. What stuck with me most was Kurt Cobain's ability to convey the emotional ebb and flow of each song, and the agony in his voice.

KYLE SMITH (RATM tribute: The Guilty Parties)
“On A Plain,” “School,” “Scentless Apprentice,” “Dive” and “I Hate Myself and I Want to Die.”

NANCY URICH (Dog Day)
Kurt Cobain was a big influence on me. I’m from an ultra-small town and as a young teen, I hated music. In my world, there was nothing but country, Tom Cochrane, G’n’R and hymns. Very depressing. I could not get into it. Ren and Stimpy ‘You Eediot’ was my favourite thing for, like, three years. Because Nirvana was mainstream, they cut past "Sweet Child o’Mine," Whitney Houston, Boyz II Men, "Livin’ On the Edge" and got to me. Suddenly I realized there was a music world (and maybe more) outside my fishing village reality. Then, as I gobbled it all up, I realized that you don’t have to be the best musician to make music, and your lyrics don’t have to be 100 percent super-lame love ballads. It can just be based on nothing in particular. You can be loud and that is OK. Today, I’m still riding my Nirvana-inspired wave of layered tracks. I love layers, more more more. Happy birthday Kurt. (I also had goats named Kurt, Lithium and Ritalin).


Tomorrow night at Menz Bar (2182 Gottingen, 10pm), Halifax bands will celebrate Cobain's birthday, including Nirvana tribute group Endless, Nameless. If you or someone you know is at any risk of self-harm, contact one of Nova Scotia's suicide crisis centres, Community Mental Health Services or call the toll-free mental health hotline at 1-888-429-8167.