Emergency Management Office opens up 11 comfort centres across the city.

UPDATE: Despite HRM's press release listing 1223 Lower Water Street as one of the comfort centres open all night, NS Power has apparently shut it down for the evening.

The lights are on at Out of the Cold—for now, anyway.

Organizer Eric Jonsson says the power has already gone out twice today, which has left the emergency winter shelter scrambling.

“We don’t have a lot of faith it’s going to stay on, so we’re actually going to close the shelter tonight.”

High winds from the bomb cyclone battering Atlantic Canada have already knocked out power throughout the city. Conditions will only worsen overnight and into the weekend as temperatures drop severely, leaving the city's most vulnerable residents at the greatest risk.

In response to the storm event, the municipality’s Emergency Management Office has opened up several comfort centres in select spots across HRM. They include:


Spokesperson Nick Ritcey says the goal is to keep the comfort centres open until 8 am, “but we will have to reassess if a location loses power.”

There won't be any beds available, however. Those are only put in place by the Red Cross during an evacuation scenario, says Ritcey.

“These comfort centres will be places to sit and stay warm with light refreshments as needed.”

Even before Thursday's storm, space was already at a premium at Halifax’s homeless shelters. Adsum House executive director Sheri Lecker says the women’s and children’s centre has been over-capacity since before Christmas.

“All our beds are full and we’ve been using cots and sofas ever since it got really cold,” she says.

While HRM isn’t yet facing the kind of horrifying scenario that’s putting so many lives in jeopardy in Toronto, Lecker says she’s still aware of several people who will be “sleeping rough” outside tonight.

According to Jonsson, any guests who would have slept on Out of the Cold's 15 beds tonight are being bussed where they can to other shelters.

“We’re going to try and scrounge beds here and there from the other shelters to try to give people a place to go,” he says. “It’s not much of a plan. We’re trying to figure it out as we go.” 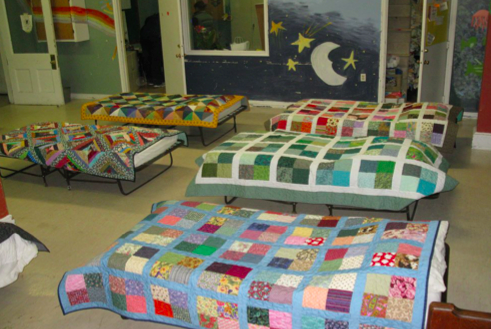 The EMO is meanwhile asking residents living in flood-prone areas or locations with only one access point to stay with friends and family for the night or visit the nearest comfort centre in advance of the worsening storm.

You'll have to get there on your own, though. Ferries are already suspended and Halifax Transit cancelled all its bus routes earlier this afternoon—with less than an hour’s notice and two hours before the comfort centre locations were announced.

As for what else the municipality and province can do to help, Jonsson would prefer longterm planning over a short-term fix.

“Mostly we just need affordable housing,” he says. “If we just had enough places for people to live, we wouldn’t need beds in shelters.”

Lecker agrees. The best way to support Halifax's homeless shelters is ensuring they aren't needed in the first place.

“I don’t want to see more shelter space open,” she says. “I want people to be in homes and have stability and know where they’re going to sleep at night.”

We’ve opened our four payment depots in Kentville, Chester, Stellarton and Shelburne, as well as our head office in Halifax, as comfort centres. These are open from 8am - 8pm today through to the end of outage restoration. Visit https://t.co/BBUNFnkZH9 for updates. #NSstorm pic.twitter.com/dbna2JdMPE