Halifax to Hogsmede: Here are few of the city’s best student-friendly watering holes. 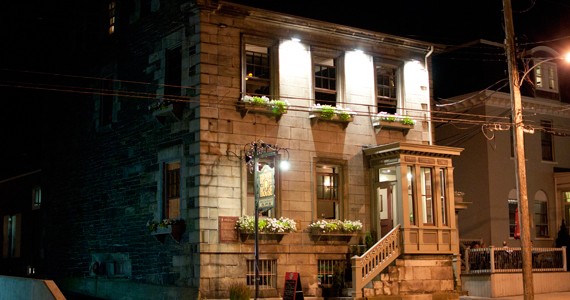 Hogwarts has Hogsmeade, Halifax has downtown: When Hogwarts students need a break from strict professors and all those confusing, moving staircases, they'd head down to the village of Hogsmeade for a beverage at a pub. Likewise, Halifax students can find respite at local taverns. They may not serve butterbeer, but Henry's House's six British-style ales---non-pasteurized, all natural ingredients, could give The Three Broomsticks a run for their wizard money. Not far from the Hogsmeade, er, Halifax train station, The Henry House's (1222 Barrington Street, 423-5660) ale sampler offers a copper-coloured best bitter, best bitter special (known as Dry Hopped to regulars), Peculiar (also dubbed lunatic broth), Keefe's Irish Stout, pale blond Ringwood and India Pale Ale. Run across to Bearly's House of Blues and Ribs (1269 Barrington Street, 423-2526) for just those things, plus great karaoke.

Wander further down High, er, Barrington Street, a block past DeSerres, Halifax's version of Scrivenshaft's Quill Shop, and pop into Obladee, A Wine Bar (1600 Barrington Street, 405-4505) for an extensive array of vino and charcuterie boards, sampling local breads and cheeses. (Too bad it doesn't smell strongly of goats, nor does it have a severed boar head leaking blood on the floor.)

Intimate and chic, Tribeca Bistro and Bar (1588 Granville Street, 492-4036) can be both cozy and a great place to kick up your heels. Known for its low light, exposed brick and weekend dance parties, it's a great place to wiggle with muggles.

After filling up your pockets with the equivalent of chocolate frogs, licorice wands and Bertie Bott's at Freak Lunchbox (1723 Barrington Street, 420-9151) wizards and arts students alike hit up Split Crow (1855 Granville Street, 422-4366) for generous mugs of grog. For a rooftop and sidewalk patio, drink specials and wood-oven pizza, Argyle Bar and Grill (1575 Argyle Street, 492-8844) is a student hub. Looking for a reason to disrobe and get gussied up? Bitter End (1572 Argyle Street, 425-3039) certainly knows how to make a martini---try the Northern Exposure.

Since 1948, The Seahorse Tavern (1665 Argyle Street, 423-7200) has been a below street-level gem, these days it's home to punk, metal and indie bands with a stellar draft---Horsepower Propeller beer. The Toothy Moose Cabaret (1661 Argyle Street, 407-3170) is hard to miss---look for the gigantic moose head poking out. With its European architecture and fabulous nachos, Economy Shoe Shop (1663 Argyle Street, 423-8845) is a place to hobnob with the Halifamous and out-of-town celebs. If Gary Oldman ever shot a Stephen King miniseries in Halifax, he'd show up here.

With its wood-heavy decor, Halifax Alehouse (1717 Brunswick Street, 423-6113), is a quintessential student hotspot---think 22 brands of beer on tap, Celtic bands and bar-wench costumes not a far cry from Hogsmeade. And with over 60 beers on tap and 100 in bottles, Maxwell's Plum (1600 Grafton Street, 423-5090) is a local legend. (Hard to believe they don't have butterbeer.)

With a rooftop deck overlooking the city, Your Father's Moustache (5686 Spring Garden Road, 423-6766) is great for people watching. For all those philosophy majors and Ron Weasleys, Tom's Little Havana (5428 Doyle Street, 423-8667) is the perfect spot to muse about the meaning of it all.