Halifax Wanderers kick off 2020 season in PEI this week

Eight teams from the Canadian Premier League are bubbled up at a Charlottetown hotel. 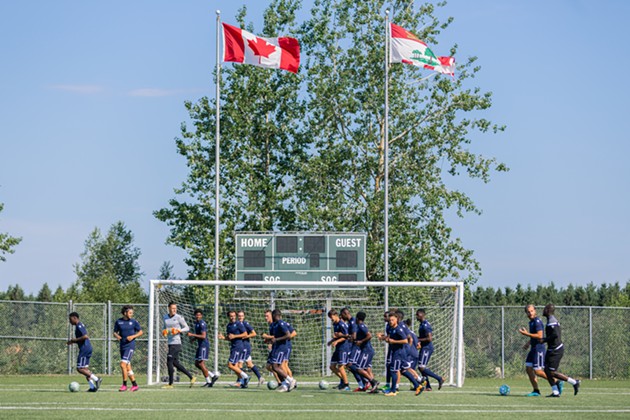 Halifax's top soccer team won’t be on the field at Wanderers Grounds this year. Instead, they’re bubbled up with seven other Canadian Premier League teams on Prince Edward Island, slated to play their games with no spectators and minimal risk of COVID.

Most of the players, coaches and referees arrived on a chartered flight (but the Wanderers took a bus) and will continue to be tested weekly for the duration of their stay.

The Island Games, as they’re called, will take place at the University of PEI Alumni Field, kicking off with a match Thursday, August 13 between last year’s top two teams, Forge FC (Hamilton) and Cavalry FC (Calgary).

The Wanderers are set to play their first match of the season this Saturday at 4pm against Pacific FC from Victoria, BC.

“We’re mostly a new team so the guys just can’t wait to get started. I mean, we all came here in March expecting our normal season. With all of what’s been happening it got pushed back a couple of months, so Saturday can’t come fast enough,” Alex de Carolis, a defender for the Wanderers.

De Carolis, the oldest player on the team at 27 years old, is eager for the prospects of a new season despite the challenges of playing during COVID.

“All eight teams are in the hotel, so they all get their own little bubble. The referees are in the hotel, they get their bubble, and all the media is their own bubble. And supposedly the whole hotel staff is here for the duration as well, so yeah everyone’s just kind of bunkered down at the hotel,” he tells The Coast over the phone from PEI.

Originally from Sarnia, Ontario, de Carolis has just been named one of three team captains for the upcoming season, along with midfielder Andre Rampersad and defender Peter Schaale. All three were with the team in the inaugural season. 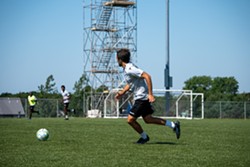 “It’s definitely an honour. I was here on the team last year and I fell in love with the city and the fans right from day one,” de Carolis says.

The new captain had arrived in Halifax just before lockdown in March, and remained here training by himself. For de Carolis, the hardest part was the 14 days of isolation before heading to the island.

“The rest of Halifax was kind of doing their thing but we weren’t allowed to do that,” he says. “We had to go back to almost what it was like in the first month of COVID when everyone was on lockdown, that was basically us.”

The round-robin portion of the Island Games will take place through September 6, and the top teams will then play for the title.

“The fact that we’re able to do something that gives our fans some entertainment to watch on television was really important, and I’m really glad we’re able to do it,” says Wanderers FC President Derek Martin.

Martin was involved in the original selection of PEI as the location for the games, which began three months ago when the island hovered around zero cases, and Nova Scotia was in the thick of the Northwood crisis.

“We started as a league talking about the idea of going to a single location,” he explains. “I volunteered to look into options here in the Maritimes, and looked at the opportunity to do it here in Halifax and also at the option of doing it in Charlottetown.”

The team arrived on the island August 8 and have spent the past week training and getting used to playing without fans in the stands cheering them on.

“I missing having it. It’s by far one of the better atmospheres that I ever played in front of,” says de Carolis. “And all of our new players, they’ve seen videos and highlights and they kind of were expecting that too, so I really feel bad for all of our new players who don’t get a chance to experience that.”

But instead of live games, CPL fans are able to watch games online, through streaming platform OneSoccer. The league also announced on Wednesday that CBC Sports would air all Saturday doubleheader games.

News: @cbcsports and @mediaprocanada have announced a partnership that will see broadcast and streaming coverage of eight games throughout the 2020 Canadian Premier League season 📺#CanPL l Info: https://t.co/AyCI9w9uIM pic.twitter.com/lmxtZHEk6r

Martin says he doesn’t expect the Island Games to create quite the same atmosphere as the one that existed on the humid, packed evenings at Wanderers Grounds last summer, but it’s the next best thing in the times of COVID.

"It certainly isn’t meant to replace what we had going on the green, the venue atmosphere last year,” he says. "That’s something we can’t wait to get back to and we’ve got our fingers crossed that by next season, by next spring hopefully we’re out of this thing that we’re in now and we’re able to do that again.”

The full schedule for the Island Games can be found online, and fans can still purchase a 2020 season ticket via the Wanderers website that includes a team jersey and subscription to watch all the games virtually on OneSoccer.