A boardwalk food empire: The Waterfront is the front line of the summer tourism season as tourists from around the world sample our local flavours at food kiosks. And sometimes they ask really stupid questions. 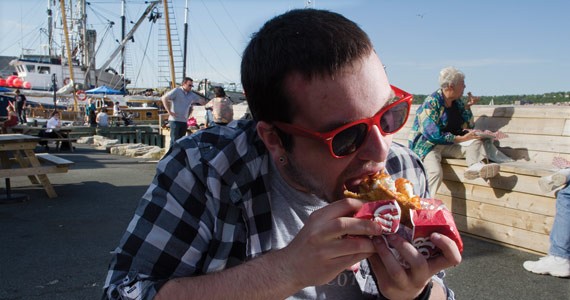 Though the peak season of July and August is still a way off, the boardwalk is already bustling on a Monday afternoon, the first seasonably warm day of the summer. The lines are forming around the food kiosks. Summer on Queen's Wharf is comfortably familiar to the senses---a constant, slightly chilly waterfront breeze wafting the smell from deep fryers up and down the boardwalk. A temple of haute cuisine this is not, but in terms of takeaway grub, Queen's Wharf does well for traditional standbys.

Like it or lump it, the summer months in Halifax typically come attached to a massive influx of tourists to our fair city. If you're one of those Haligonians who try to maintain a quiet summer in the city, unimpeded by the crowds of agog visitors, you probably tend to avoid the waterfront at all costs. But for many downtown shop owners, there's no denying simple economics: tourist season also brings a substantial injection of travellers' cash to the downtown core. And the waterfront sees a booming business thanks to the cruise ships that come into port throughout the summer, as well as crowd-drawing events such as the relocated Jazz Fest and the Buskers' Festival.

Jamie Crockett and Megan MacLeod are hustling to serve up meals behind the counter of The Battered Fish, a wooden hut at harbour's edge specializing in that most Maritime of dishes--- haddock fish and chips. Visitors come into town looking for Atlantic catch, Crockett says, "and our fish is hard to beat." Then he adds, wryly, "We do get a lot of, 'Is your seafood fresh?'" To make his point, he sweeps his hand towards the Atlantic Ocean a few feet from where he stands.

All of their catch is both fresh and locally sourced: haddock from Amherst, clams from White's Cove and scallops and shrimp from the Fisherman's Market in Bedford. In peak season, between avid locals and passing tourists, the stand may serve anywhere from a few hundred to over 1,000 meals a day. "By July and August, this whole place will be packed pretty much constantly," says Crockett, nodding toward the boardwalk where another line is beginning to form.

Just around the corner, another iconic kiosk of Queen's Wharf can be found, less traditionally Maritime in its offerings but no less a destination for curious tourists. Perhaps a dozen amblers mutter "BeaverTails!" like a mantra, and the harbour's edge is lined with smiling dozens who are tucking into this Ontario-born treat. Beaver-Tails---hunks of whole wheat dough that are flattened, fried and topped with decadent sweets---may be an enemy of the arteries, but they're exceptionally hard to pass up, and serve as singularly effective Canadian ambassadors for hungry visitors.

Barack Obama's widely publicized consumption of a BeaverTail during a 2009 visit to Ottawa has done a lot to boost the dessert's public visibility. The company now features the US president's likeness on its packaging. Even so, the vendor reports, "We still get a lot of people asking, 'Are they actual beavers' tails?'" Sometimes, he insists, they're not joking.

BeaverTails are by far the most famous of the waterfront's sweet treats, but by no means are they the only choice. Immediately across the way, at the Black Bear ice cream kiosk, Brandon Morrison is all smiles as he hands out scoops to customers. The Black Bear stand was a staple of waterfront eats seven years back, and as of last year has returned to Queen's Wharf.

A friend of Morrison's stops by to chat---a tour guide for the Harbour Hopper---and he asks her to help him out with a sales pitch for the stand. "It's ice cream," she says, shrugging. "It sells itself."

Maybe so, but this is also handmade ice cream, sourced from Nova Scotian dairy and made by Morrison's dad, Jerry---owner of Black Bear and former employee of Farmer's Dairy.

Morrison is reluctant to dish the dirt on the tourists, responding with a laugh. "There are some stories that I won't get into," he says, "but they're a really good bunch of people."

The vendors seem to have a genuine fondness for the tourist crowd---or at least some very good poker faces---and it's good to know that, whatever cynicism our locals might have for the visiting summer gawkers, these chipper food-slingers are out on the front lines helping Halifax put its best and friendliest foot forward.

And if anyone asks, yes, the seafood is fresh. And no, it didn't come out of the harbour.