Deep in the heart of Texas, home to brews of “exceptionally poor quality,” a blogger writes in praise of Maritime beer. 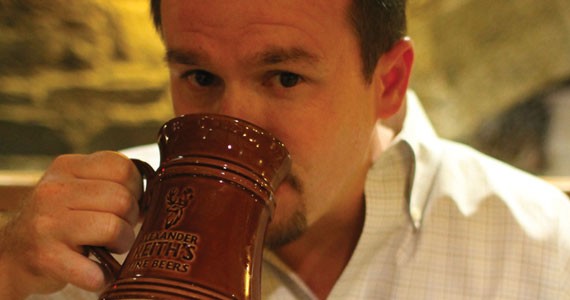 This St. Patrick's Day, remember how lucky you are to live in Canada. Chuck Gillis wishes he had what we all take for granted: While we sit here in our ivory towers drinking all the Garrison and Keith's we want, he's stuck in Texas, unable to get either. And he loves Garrison and Keith's.

Gillis is a fifth-generation Texan, and the director of a law firm in Dallas. His love affair with Canadian beer began when he was 19. He was in the National Guard and had the opportunity to come across the border. He never knew beer could be so good.

"A lot of it has to do with growing up with exceptionally poor quality beer here," Gillis says of his home state. He documents his passion for Canadian beer on his blog called The Unofficial Canadian Beer Embassy--- Texas (chuckgillis.tumblr.com).

Many of his posts are laments. He grouses about the difficulty he has getting his preferred brews in the US. When he goes to a restaurant and asks if they have Canadian beer, "you'd think I was asking for some radioactive isotope," he says. "Getting something from Europe, not a problem. I can get a Guinness anywhere I go. It's almost like I ask for fun now, because I know what the answer's going to be."

The Canuck brews readily available to Gillis are "Molson Golden, Labatt Blue and Molson Canadian. The nicer places carry all of the Unibroue, so I can get Trois Pistoles, Don de Dieu, La Fin Du Monde."

He'd love to get a Keith's, but the beer he wants most of all is "Garrison's Nut Brown ale. I think it's just absolutely wonderful. I have three bottles in my fridge down here and I'm saving them for, I don't know, something special. If I find out the world's gonna end, I'm popping all three."

Over the years, Gillis has visited Canada nine or 10 times. "The first time that I came up to the Maritimes, we did a trip to New Brunswick, PEI and Nova Scotia. It's absolutely gorgeous, the people are nice, the food is wonderful, there's lots to do and see and so I think my wife was very concerned that I wouldn't come back."

In addition to beer, Gillis has bought "dozens and dozens" of Canadian t-shirts, which he says he's always wearing "if I'm not in a suit." He has an inukshuk, a Canadian flag, PEI dirt and assorted Canadian rocks in his collection. He says he's saved every Canadian beer bottle cap. He regularly gifts Canadian beer, as well as chocolate bars from Sugah!, to friends and co-workers.

"Half the people absolutely love the stuff and think it's neat and kind of try to find it themselves, and then the other half just think I'm a lunatic," says Gillis about his friends. "The Canadian consulate is in my building...we've joked about having some beer brought down in a diplomatic pouch."

However, he hesitates to find a permanent source for his favourite beer. "It's not like I need an excuse to go back to Halifax, but it's kind of fun to say 'Well, we're out of beer. We've gotta go back up there.'"