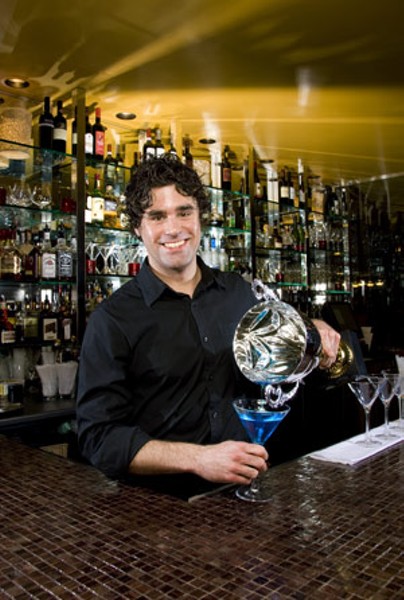 The winner of this year’s Best Bartender has both the chops and experience to justify the win. Working at Mosaic since it opened in late 2006, Cooper Tardivel has been bartending for 12 years, since he was 18, in watering holes and swanky joints as far flung as Vancouver, Mexico. Australia and Fiji, and he brings all of his knowledge to bear when creating his award winning martinis. “I try to keep ahead of the curve, to challenge the customer,” he says. He has contacts around the world, friends working in other bars that share their discoveries with him, and vice versa. The exchange of information and new creations keeps him engaged in his work. “If I made 100 rum and cokes every night I’d be bored out of my mind.”

Tardivel is a well of cocktail secrets: Recently, when the *Sex & The City* movie opened, the popularity of Cosmopolitans peaked again, but apparently, no one in town makes them like they were originally supposed to be made.

“In a blind taste test, people like the original,” he says. For the curious amongst you, the original involves muddling fresh lime and cane sugar together, adding lemon-infused vodka, orange liqueur and fresh cranberry juice. “It comes out pink, says Tardivel. “It makes such a difference if you make cocktails the classic way.”

He’s a fan of making the Cosmo, as well as something called The Waterfall (“my creation,” he writes in an email) and the Mojito (“now that it’s summer”).

“I enjoy making any, and all ‘great’ cocktails but I really love making custom, one off cocktails for customers who are looking for something unique. It challenges my product knowledge, and my abilities as a mixologist. Plus, the end result is the customer feeling like they're being paid exclusive attention---which is the feeling that I want every customer who sits at my bar to have---that way it's more than just the job of making drinks, it's a relationship.”

In March of this year, at the Bols Around the World: Global Cocktail Master Championships in Amsterdam, Tardivel represented North America in the contest between 10 of the world’s best cocktail experts. He won the Canadian primary, at which competitors were asked to create an alcoholic treat that best represented Canada. Tardivel’s True North Martini won over 86 other creations. In Amsterdam he placed third in his efforts to be the Bols Cocktail Master of 2008, the highest ever placing for a Canadian. “I learned more in the week I spent in Amsterdam than I had in years,” he says.

The True North Martini is made with Yost maple dessert wine, Bols chocolate liqueur, Disaronno amaretto, and candied apple balls, garnished with 4 Nova Scotian blueberries, which act as a palate cleanser between sips, “thus allowing each sip to be as fresh, and as new to the palate as the first---this method enhances the drink’s ‘taste cycle,’” he explains. “That might be way too much info but once I get started talking about cocktails it's hard for me to stop.”

Tardivel recommends you wait until at least the fall to sample a True North at Mosaic. “It’s a winter warm-up . It’s heavy and sweet. It’s not designed to be ordered when it’s 25 degrees.”

But you can guarantee he will recommend a Mojito, and turn Mosaic into a swinging corner of Havana for the length of the drink.