A collapse in world paper markets produces a fundamental shift in how Halifax recycles. We explain it in 9 easy steps.

1. Halifax's waste system is easy for residents: one green waste bin, recyclables in blue bags and garbage in a regular trash bag. The recyclables are sorted at the Materials Recovery Facility in Bayers Lake, with plastic, glass and paper sent to processors. The MRF sorts about 22,000 tonnes of paper each year; newspaper, cardboard and bond paper, separately, are sold to the highest bidder, typically mills in Quebec and New England, where it is processed into other products.

2. But the city program is intended only for residents. "ICI" customers---industrial, commercial and institutional---contract with one of four approved private haulers to pick up their waste. ICI paper amounts to about 40,000 tonnes annually, twice what goes to the city's MRF. The haulers place a single bin for "mixed paper"---office paper, newspaper and cardboard together---behind businesses; the trucks bring the paper to one of two private recycling facilities, owned by Scotia Recycling and Great Northern Recycling, both in Burnside, which in turn sort and sell the paper to processors. Scotia Recycling also transfers much of the cardboard it receives to a plant it owns in Hantsport that makes paper plates and trays.

3. Mixed ICI paper has been a lucrative business. The recyclers were paying haulers up to $130 a tonne for it, offsetting the cost for trucking away garbage and other recyclables---in effect, the paper bin behind a business was subsidizing the garbage bin, bringing lower waste fees to business owners. But with the global economic collapse, the bottom has fallen out from under the recycled paper market; since November, instead of paying for it, the recyclers have been charging haulers up to $175 per tonne to process the mixed paper, and in December the recyclers said that as of April 1 they will no longer accept mixed paper at all---cardboard, which is still profitable, must be sorted out before entering their facilities.

4. In addition to residential paper, the Bayers Lake MRF also presently accepts, for free, a small amount of ICI paper, mostly from nearby businesses that find it cheaper to drive the stuff over to the city facility than to pay a hauler to truck it to Burnside. But the MRF only has capacity for about 4,000 additional tonnes annually---the 40,000 tonnes produced by the ICI sector would overwhelm it. Fearing that the four haulers would start bringing their paper to Bayers Lake to avoid the new fees Scotia and Great Northern have placed on them, city staff wanted to prohibit businesses and haulers from bringing ICI paper to the MRF, and to support Scotia and Great Northern's desire to require businesses to sort out cardboard before it gets picked up.

5. But councillor Sue Uteck argued that the plan in effect would give Scotia and Great Northern a shared monopoly---businesses would be required to use the recyclers' services (via the four haulers), but Scotia and Great Northern are otherwise unregulated and could charge any price they want. And while businesses have been selling cardboard to the recyclers, Halifax's much celebrated waste diversion program assumes that ultimately the city is responsible for recycling; the proposed change, however, would shift that responsibility onto private companies.

6. Moreover, the plan would impose great inconvenience and cost on businesses. The large institutions would have to start paying workers to sort paper and cardboard, and smaller businesses would have to find space for a new cardboard bin next to their three existing bins. "When we set this up, it was three-stream waste recycling," says Uteck. "People just aren't prepared to have a fourth."

7. Instead, Uteck wanted the city to expand a small sorting facility at the Otter Lake landfill to be able to accept ICI paper for all of HRM, adding it to the residential paper recycling that comes out of Bayers Lake. Halifax's solid waste manager, Jim Bauld, objected to that idea, because the city has no idea what future costs it would incur. Also, says Bauld, because he is obliged to sell to the highest bidder, he can't guarantee Scotia's Hantsport cardboard deliveries---the city's cardboard could very well go to Asia. But Scotia says that without the cardboard it now receives from the Halifax ICI sector, it would have to buy foreign cardboard for use in Hantsport---in this absurd scenario, the city would export Nova Scotia cardboard to China, while at the same time Scotia would import cardboard from New England into Nova Scotia.

8. After two months of sometimes heated debate on the issue, council Tuesday reached a compromise plan that leaves no one completely happy. Scotia and Great Northern agree to extend the deadline for the four haulers to separate out cardboard from April 1 to June 1. The haulers meanwhile will begin acquiring more bins and placing the bins behind businesses. And the city moves to enact a new bylaw requiring businesses to separate cardboard, effective September 1; between June 1 and September 1 the city will accept ICI paper at Otter Lake and embark on a public education campaign about the bylaw.

9. "At least we're giving businesses time to prepare," says Uteck. Still, moving to a four-stream waste system underscores a fundamental philosophical shift in the way Halifax recycles. "The real issue is: Who's going to take stewardship of our solid waste facilities when markets start to fail?" asks Uteck. "And what happens if the glass market collapses? Are we going to start requiring residents to separate out green glass from brown glass?"

To get the big picture of this story, read the print version, in pdf.. 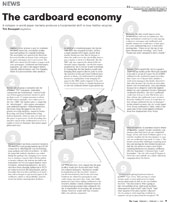