From Broadway show tunes to standard classical arrangements and folk, they’re singing it all 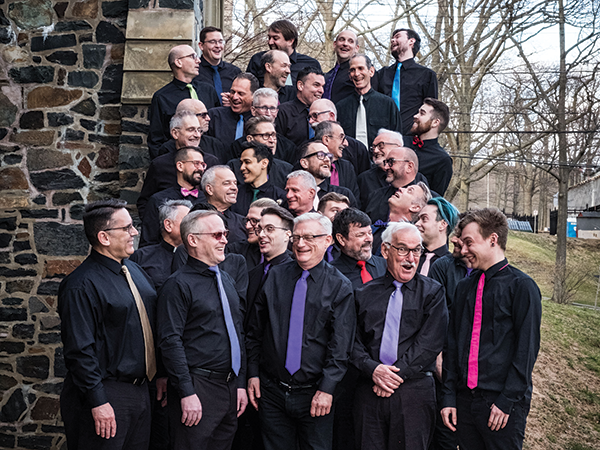 The Halifax Gay Men's Chorus is preparing to make its mark on the city when it introduces itself to the 2SLGBTQ+ community in a very public way at this year's Pride Festival. As Nova Scotia's first gay men's chorus, it's an historic milestone for both its members and the communities it represents.

Nearly 10 months old, the chorus is still in its infancy, having had its first open meeting in November. However, its newbie status hasn't slowed momentum. With more than 40 members, it's attracted more interest than initially anticipated.

"We were hoping for 10 or 12, so it was a nice surprise," says Tim Callahan-Cross, executive director of the Nova Scotia Choral Federation, who sings in the chorus.

Created in part to accompany the local lesbian choir The Women Next Door at the 2022 Unison Festival, the HGMC has already been warmly received by the general public. Adding two sold-out shows in June to its growing list of accomplishments, the group of men and non-binary-identifying individuals was offered a rehearsal space by First Baptist Church. "That's something that wouldn't have happened 15 years ago," says Callahan-Cross. "It felt very much like we had been welcomed by the community."

Rehearsing on Thursday nights at the church, the group can be heard singing everything from Broadway show tunes to standard classical arrangements and folk—all within an inviting environment.

"From the first time we got together and read music together to our first concert, the level of support within the chorus has been wonderful," says Callahan-Cross. "It's nice to be in a space where you can be yourself. We take the music seriously, but there's a lot of fun and laughter."

That fun spills out beyond the rehearsal space. With members ranging from 20 to over 70 years old, the chorus can be found around town grabbing a drink or bite to eat post-rehearsal. "We've talked a lot about community, family and providing support for those that need it," says Callahan-Cross. "Times have changed, but there's still that need for community and a place of belonging."

The group of singers is gearing up to spread its message with Halifax Pride events that include a performance at the Garrison Grounds mainstage on Saturday, immediately following its march in the parade. Ultimately, Callahan-Cross hopes to see the HGMC resonate with anyone who has an interest in being part of the chorus, and notes open rehearsals are held every few months. "It's very much about acceptance and being who you are," he says. "There's a place for everybody."

As for the future of the choir, Callahan-Cross hopes it can survive and thrive well beyond 20 years. However, for now, he's focused on keeping the "fledgling" group on its upward trajectory as it prepares for the 2022 Unison Festival—which brings together Canadian LGBTQ choruses—to be hosted in Halifax.

"Our goal is that we'll be an extremely well-established chorus by then," he says. "And that the idea of having a gay choral festival in Halifax will seem second-nature, and that we'll have a great reception."