Wyatt White sits down for a Q&A about his newly created position at city hall. 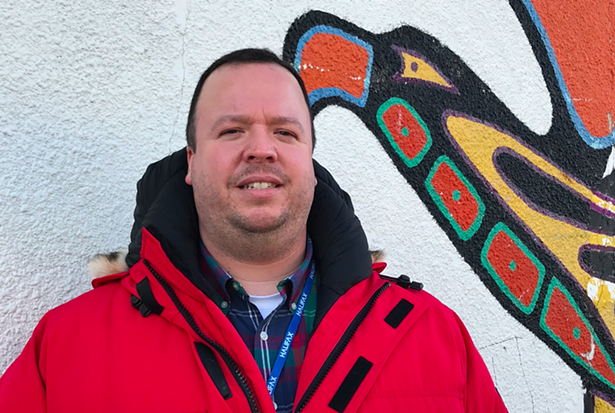 The wave of reconciliation is shallow, but it’s spreading. So says Wyatt White, the Halifax Regional Municipality’s first-ever Indigenous advisor.

White, who hails from the Listuguj Mi’kmaq First Nation on the New Brunswick/Quebec border, is a former aboriginal affairs advisor to Environment Canada and to the provincial department of Education.

He recently sat down with The Coast to talk about his new job, Edward Cornwallis and some of the racially charged comments made by city council over the past year. His answers have been edited for style, clarity and length.

Why'd you  this position with HRM?
The of Education and the School Board Association started the conversation this past summer for an upcoming conference Nova Scotia is hosting next June at the Westin. What does it tell the rest of the country when we host an education event with a huge Indigenous education focus, and we've chosen for whatever reason to host it in front of this [Cornwallis] statue? That began the conversation with [HRM’s manager of diversity and inclusion] Tracy Jones Grant and the mayor's office. It happened to come up right around the same time councillor [Shawn] Cleary was pulling together his motion to establish a panel to look at commemoration. I thought this seems like a place where the need might be greater. Do I stay somewhere where there's great momentum and just requires a little bit of steering, or do I go somewhere where there's a void? What really drove me was, I don't want in 10 years to think back how 2018 was the year that something happened, something big from a reconciliation perspective, and I had the chance to kind of be in the middle of it.

So with the conference next year, is the idea that the bulldozers will come out and the statue will come down?
If you'd asked me the question six months ago, I would have said I think our goal is something physical happens. The conference isn't moving, but maybe Cornwallis will. If you ask me now, I think the outcome of the conversation is of greater consequence than the statue itself actually moving. I don't believe the panel will have done its work by early July. I really believe the dialogue that will come out of it will yield a much, much greater result to reconciliation than just taking the statue down or moving it somewhere.

It seems you're presupposing what the panel will come back with, in terms of taking the statue down.
I wouldn't go that far, but I would say that some change will have to occur. Some physical change of some sort. Perhaps it's more focused on the renaming of assets. If anything, just the conversation over the last year, when you hear the “Cornwallis” word, it's causing people to become a little more comfortable with the discomfort.

Is it about a conversation, or is the panel a way to ease that discomfort and stretch things out enough that that anger is lessened?
Whether he said it explicitly this way, or it was the way I understood it when the mayor spoke about it, is we're only going to come together around the topic of reconciliation if we deal with the Cornwallis issue in a way that involves dialogue and bringing people together. Whether you want the statue to stay or go, you're going to have to open your mind to other views and opportunities. The reality is most Indigenous views of commemoration don't involve individuals. The Mi'kmaq have never named anything or any place based on a person or a leader. So you don't get mixed up in this issue of 100 years later you find out, oh, someone's not perfect.

We also change the names of things all the time. We put Ray Ivany's name on a building where it wasn't before.
Stay current with the times, right? I find it odd we haven't tackled Mic Mac Mall. You also don't see the Mi'kmaq community writ large rallying to say take the statue down. That's more of an individual thing. Generally speaking, the Mi'kmaq community tends not to take this adversarial or positional point of view. Typically the approach is grounded in what was founded through the Peace and Friendship treaties. We're not going anywhere, and you're not going anywhere, so let's figure out how to work together.

Action can get bogged down in , staff reports and consultation. What stops you from being just another mid-manager in that bureaucracy?
I think the absence of having anyone inside from the community who can give reasonable advice has caused a sort of fear to do anything at all. There's not enough of a relationship with the Mi'kmaq community outside of government to ask for help, and there's nobody inside to provide that insight. I also think it might be a matter of timing, right? It's the broader public pressure that's saying “You need to do something.” I'm a little shocked that it was only 2017 when the city said we need to hire someone who's going to provide that advice. I feel like that admission alone—I'm surprised more people haven't asked, “So where were you getting your advice before?” The timing is right. We can't go backwards. They can't un-hear something. The position seems to—at least based on last week's interaction—have a fairly close opportunity to talk to mayor and council versus maybe burying the position somewhere further down.

Last week's roundtable discussion with Halifax activists talked about the balancing act in representing a marginalized community—defending that group from a hateful or indifferent system, but also being accountable in your words and actions to those you represent. I’m wondering what your thoughts are on that.
Within [provincial] government, there's a view that because there's an existing Mi'kmaq-run education system, that I'm somehow part of that. I would hear a lot of, “Well, your schools...” I don't have schools. I work for the minister, too. When I go be the representative of the department at a Mi'kmaq education meeting, it's the same thing. It took me a while to realize that when they're raising their voice or raising fundamental issues around lack of equity or support, it's not me. It's the position I'm in. We'll see how much of that I face here because expectations are high. I've decided to dedicate what I can for a couple of years. If I'm getting bruised from both sides, that I think is itself an indication of where we are in the relationship. I don't anticipate needing full armour to get through the next six or seven months, but if we have a follow-up conversation I'll let you know how it's going.

You’ve been a proponent of the Secret Path, and last week we saw some pushback during the discussion of a Legacy Room at City Hall to having Gord Downie's name centred. How do you respond to that debate?
It was never intended to be a source document. It's an artistic representation between two artists—two white artists—based on a third representation, the Macleans article. People shouldn't be looking to the Secret Path as anything more than the inspiration for reconciliation. Because it's one of the few really big examples of reconciliation, people automatically attribute more to it than is required. If we had lots and lots of resources in the school system telling what would be the thousands and thousands of other stories of kids who didn't make it, we wouldn't be having the conversation about why does it take the guy of European descent who’s famous to tell somebody else's story?

[During White’s first appearance before in his new job, councillor Richard Zurawski commented on the “irony” of his last name. White alluded to the incident in our interview, so we asked him about his response.]
It's kind of interesting that [he] raised that issue; that you're basing what I'm saying either by the nature of my last name, or how I look, right? Because I don't present as Indigenous. It took me . I had feared for the first 15 years I moved here that someone would say that, and then someone did. It made me feel weird, but then I thought from their perspective. They're thinking that every Indigenous person has an Indigenous-sounding last name. Where I don't present physically [as Indigenous] and my last name doesn't suggest, it has given me insight as an invisible person in the room. In different boardrooms around the province, people just forget or they assume, “Oh, there's no Indigenous people here, so I'm going to speak freely.” And it's been uncomfortable. I've had several encounters where I hear a comment and I realize they're only saying this because they feel like they have the safety in the room to criticize or to comment.

This year we saw several racially charged comments from councillors. How do you meet with those individuals, knowing you've got to overcome that perspective?
I constantly am reminded now that what they say is 100 percent a reflection of the person who's saying it. It's a really hard thing to try and wrap your brain around, that this isn't about me and my identity. This is that person's perception. My job now is to try and alter their perception. My job is to try and influence and provide the best information possible to reshape their perception. I can't impact their historical perception. I don't know the road they've walked. Politicians who represent thousands of individuals can't know everyone's stories, but I think they have to be open to that change. So, I really need to see that between now and if we have this conversation even one year from now, that there's been a shift. I was surprised by some of the individuals who did show up for the blanket exercise that mayor and council agreed to participate in. By agreeing to do it, you're showing that there's an openness. The majority of  was there.

Some specific people weren't.
But some specific people were, and that alone...I was impressed to see it was a larger group than I would have thought. No act is too small not to count, especially in [these] early days. We've reached a point where the door's open. It's not going to close. We just have to keep wedging the door open a tiny bit more and more. I hope there's enough patience for people to see that. If we can keep showing incremental change, you'll pull the entire community along with you.