Haligonians are composting almost twice as much as they are recycling

A look at where your garbage ends up after it leaves the curb, and just how much of it ends up there. 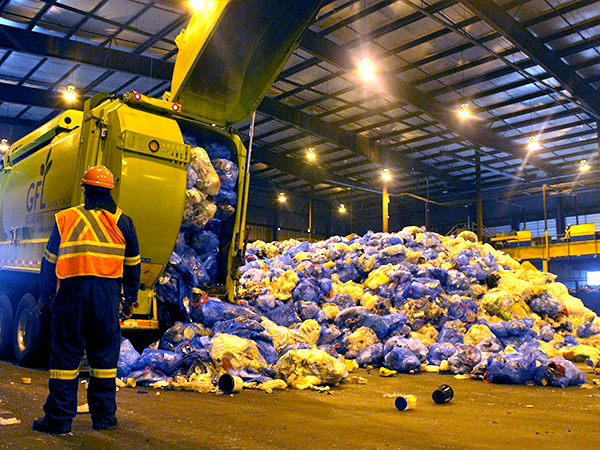 A ccording to HRM, residents disposed of an average of 380 kg of waste in 2017-18. That's like 380 bags of flour per person. This includes everything from clear bag garbage to recycling and compost. The reported national average for Canadians is almost double that number, at just over 700 kg, according to Statistics Canada.

Halifax may be doing well in terms of how much waste we produce, but it all still ends up somewhere after garbage and recycling collection trucks haul it away from your sidewalk. One of those places is the Materials Recovery Facility (MRF—AKA the "murf") in Bayers Lake."We get about 75 to 90 trucks per day, Monday to Friday," says Chloe Kennedy, a Waste Resource Educator with Solid Waste Management in HRM. Those trucks collect recycling from 137,000 households and businesses, and drop off 535 tonnes of blue bags at the MRF each week. That's the equivalent of 25 Metro Transit buses. "It's about 80 percent residential waste that comes here and about 20 percent business waste," Kennedy explains. While recycling goes to the MRF, clear bag garbage goes to the Otter Lake landfill, where it is eventually buried. Compost, on the other hand, goes to two separate facilities because of the sheer amount of it. "We have almost double the weight of organics to manage in the city, which is why we needed two plants," explains Kennedy. The compost facilities—Miller Composting in Burnside and the Ragged Lake Compost Facility outside Bedford—each hold about 25,000 tonnes, while the MRF holds 36,000.

Aside from that, there are also special waste items. Halifax Construction and Debris Recycling collects lumber and concrete. And of course, Enviro Depots give refunds for bottles and cans, and collect items like paint and electronics.

Back at the MRF, recycling trucks arrive back from their routes and line up to enter the building. They drive through, first emptying the paper—AKA fibre—portion of their truck into one pile, then dumping the container recycling into another. A front-end loader pushes the blue bags up a conveyor belt to the facility's second level, where a machine splits them open and spills their contents for workers to sort through."There's roughly 24 workers that work up there and that are sorting out the materials that we are going to send off for recycling," Kennedy says. These workers are picking out anything that can be recycled, called a positive sort. This includes containers from food and personal products plus plastic bags."When people put things like bottle caps, plastic cutlery and plastic straws in the recycling, we can't capture that," explains Kennedy. On the other side of the facility, paper products are sorted in a negative sort: workers take out anything that doesn't belong."Stuff like pencils or clementine boxes," Kennedy adds. "People think they're wood, paper is wood, I'll put that in the paper recycling. But we have to take those out."

When the material is sorted, it's compressed into large bundles to be sold and shipped to end markets. But where those end markets are is kept quiet because the industry is so competitive. "Details about markets are kept confidential so the markets we have secured are not flooded by others," explains Maggie-Jane Spray for HRM, adding that all container plastic is sold domestically, while paper is sold to both domestic and international markets.

Kennedy says that when she started working with HRM two years ago, there was a lot of attention being brought to China's ban on importing North American plastics, but "everything collected for recycling in Halifax does have an end market, and stays out of the landfill."

One local market that the city is eager to promote is Goodwood Plastic Products in Dartmouth."Plastic bags are processed at Goodwood Plastics to manufacture wood lumber for assembling outdoor furniture," says Spray. So far, almost a dozen picnic tables from Goodwood have been placed at city parks, including Penhorn Beach, Albro Lake and Birch Cove Beach. Kennedy, who's been working in the industry for a decade, says that over the past two or three years people have become more curious about where their garbage ends up. "People are starting to be more critical, for sure," she says.

As one of five waste resource educators, Kennedy talks to the public a lot. This includes everything from tours of the facility for school groups, to backyard composting sessions by request and random drop-ins to check that businesses are recycling properly.

"For the most part, HRM residents do a very good job of recycling. We've been doing it since 1992 so it's kind of ingrained in us," she adds. "As a Nova Scotian if you travel to somewhere that doesn't have an organics program or container recycling, it feels wrong to put your banana peel and yogurt container in the garbage can."