A Haligonian heads across the pond to report from the Harry Potter Walking Tour of London. 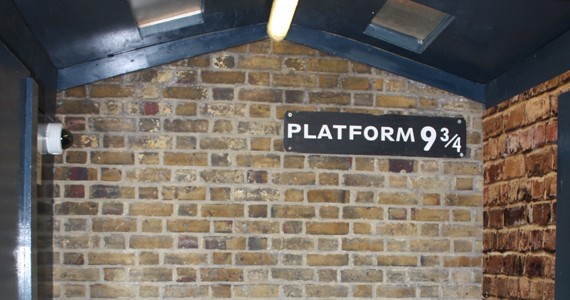 Where to catch the Hogwarts Express.

I have the worst travel karma. I book a flight and the country blows up. Case in point: Japan, my original vacation destination. I planned to visit my friend who was teaching English---Mother Nature had different plans. Scared out of going for fear of one day giving my parents three-headed grandchildren, I was forced to seek vacation solace somewhere else. After discussion with my travel buddy, we decided a quick jump across the pond would do just fine.

Ignoring the news about the London riots that began four days before I was scheduled to leave---see "travel karma"---I went to work plotting every waking moment in the British capital. Scouring the internet for deals that wouldn't involve harvesting a kidney, I came across the Harry Potter Walking Tour of London. Bingo.

Admittedly a little embarrassed to be one of few people taking part in the tour that was living when the first book was released in 1997, I felt much better when our tour guide, Yuki, popped on his sorting hat and dug out his wand.

We begin at Leicester Square, home of all the Harry Potter premieres except Harry Potter and The Deathly Hallows Part 2, which was far too large and had to be hosted in nearby Trafalgar Square.

A short trot from the tour's start is Cecil Court, an alley filled with 100-year-old shops. A walk down here feels like you've taken a jump back into Queen Victoria's time. Full of history and character, it is believed that Cecil Court was the inspiration for Diagon Alley. Look! That could be where Hagrid first took Harry to gather his school supplies.

Shops along the way include Watkin's Books, known to Harry Potter experts as Flourish & Blotts Books. (The movie version of Diagon Alley was actually built on a set, but holds true to the look of Cecil Court.) At each stop along our tour, we're quizzed by our tour guide on some HP trivia. This gives my travel buddy and I a chance to seriously school the children on what being a Harry Potter fan is all about. Sure, one kid couldn't speak English, but that's not my fault. I'm clearly the Hermione of this group.

We continue our walk around the increasingly wet streets of London, passing by Trafalgar Square and Whitehall, which served as filming locations for scenes outside the Ministry of Magic. The prestige of these streets makes me envious of anyone that can afford to live here. It's an amazing mix of Victorian architecture and the modern magic of British developers.

Unlike some films that seek out filming locations and add sets and props to fool the viewers and trim the budget---such as Twilight's stronghold in Vancouver and their quest to make it look like the embarrassed birthplace of wherever the hell that series takes place---J.K. Rowling insisted that the majority of the films be shot on location throughout London. She also stipulated that the majority of the actors must be local. Based on that, I assume I'm continuously surrounded by Harry Potter extras.

Walking through the streets of London, it's easy to lose track of time between destinations. Between the people-watching and appreciating the architecture, the three-hour tour needs to be doubled. Our route eventually takes a turn towards the banks of the River Thames and its authentic cobblestones. Murder on the feet, but worth every twist and wobble.

This area is home to many stately London pubs. Any HP fan worth his salt will know that there is a number of references to pubs throughout the franchise, an important bit of London pop culture J.K. Rowling didn't miss. The list includes The Three Broomsticks, where we get our first glimpse of butterbeer; The Hog's Head, where Harry is interviewed by Rita Skeeter during his fifth year at Hogwarts and of course The Leaky Cauldron near Charing Cross, the gateway to Diagon Alley. The inspiration for these fictional pubs can be seen throughout the city; The Anchor Pub, one of the oldest pubs in London, is apparently haunted by the ghost of a dog.

Hopping aboard a Thames mini-cruise we float under Lambeth Bridge where, in The Prisoner of Azkaban, we see the purple, triple-decker Knight Bus squeeze through two oncoming double-decker buses. Our tour of the Thames stops right beside the Millennium Bridge---constructed by engineering students, the bridge opened in 2000. Unfortunately, upon the public's maiden march, the bridge began to sway, earning it the nickname of Wobbly Bridge. It was immediately shut down, tweaked and reopened in 2002, only to be destroyed in 2009 by Death Eaters in the movie version of Harry Potter and The Half-Blood Prince. It was deemed best suited to replace the fictional Brockdale Bridge, being the easiest to destroy using CGI special effects.

Our tour concludes where Harry's adventures begin---King's Cross train station, at platform 9 3/4, where you catch the majestic Hogwarts Express. Actually filmed between platforms four and five, the city of London created an homage to the famed scene by placing a trolley in the brick wall. (Due to traffic created by its popularity, however, the mini-museum was relocated outside in a little hut.)

Published in 69 languages, spanning generations and connecting children (and adults) all over the world, J.K. Rowling---once an impoverished single mother---birthed a phenomenon. The story may be complete, but London itself still serves as a reminder, with those eight movies filmed in its streets.