Suneetra Karam Singh fights the stigma of rape with her new dance performance. 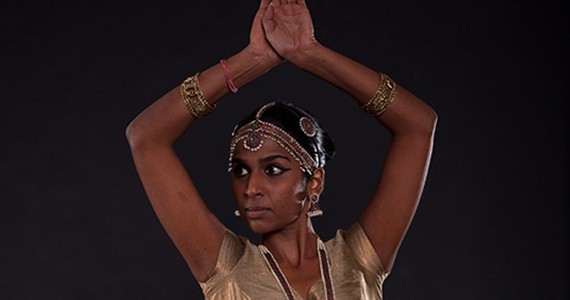 After years of being faced with the nasty glare of stigma, Suneetra Karam Singh is looking it straight in the eye, and staring right back. Saturday marks the beginning of her journey, during which she'll dance her way across North America raising awareness and fighting the stigma of rape for not only her own freedom, but for other survivors, too.

"The dance show is called Sacrilege of the Goddess to capture the fall from divinity that a woman experiences after her rape. She forgets her purity and her beauty," says the Malaysia native of her rich, emotion-filled Bharatanatyam performance, which she plans to bring to major cities in Canada and the States. "My dance is the journey towards regaining that divinity. The journey of a woman away from her rape, and towards sanity and sanctity."

Singh, now 27, was first sexually abused at the age of four and continued to be tortured---and silenced---by her abuser for over 10 years. Even worse, during this period of silence she was also raped on three separate occasions. She kept quiet about her experiences for many years, living like what she calls a victim instead of a survivor.

But then, something clicked.

"I had allowed these men who violated me to control how my life would be, even though they were in my past. That personal epiphany was all I needed to wake up and have a paradigm shift," says Singh of the moment that changed her outlook. "As soon as this happened, I found that I began to meet others who were lost in their own world of pain, other women who had been raped. They seemed to be looking to me for answers, but I know that in rape, all the answers truly are within us already. Rather, I shared with them my own story. By knowing that they were not alone, I changed their world. The more I shared my story, the more women reached out to me."

Her next revelation came just a few months ago, when she decided take her battle on the road, to break down the glass ceiling of stigmatization that she and countless rape survivors deal with daily. Her weapon of choice? Art, in the form of 20 years of traditional dance training.

"Bharatanatyam, the ancient dance of India, is a combination of pure dance movements with an emphasis on geometry and expressive storytelling," she says of the performance, during which she'll be accompanied by local world music ensemble SuryaChandra. "As such, I feel that it is an effective tool in communicating the journey of a woman after her rape. Also, the legend is that Bharatanatyam was handed down from the Hindu gods themselves. The dance of the gods for the woman who has forgotten her own divinity."

Singh is communicating her journey in more than one way though by reaching out to people who might not necessarily see her take the stage. She's also started a blog (sacrilegeofthegoddess.wordpress.com) which shares powerful narrative accounts of her past experiences, insight to issues of rape, assault and the government in Malaysia, as well as the stories of other survivors. And both the blog and her dance tour are independent, unsponsored endeavours.

"I am participating in the evolution of humanity. This is the work of my life. The time is right. The time is right now," she writes in a recent post, in which she calls Sacrilege of the Goddess her first step in that journey. Joining the crowd at Neptune on Saturday night is yours.