Laurel Harrington, the owner of Freeman’s Little New York, helps dissect the anatomy of a perfect plate of garlic fingers. 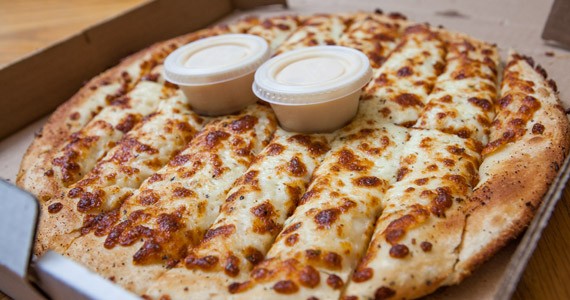 If you wind up at Freeman's at the end of a long night—whether you've spent it slamming back beers or cramming for a final exam, if you're a local or an out-of-towner—and ask for a recommendation, chances are it'll be garlic fingers. The uniquely Nova Scotian, highly addictive snack is comfort food at its finest, and while it's hard to think of how buttery bread and gooey cheese could ever go wrong (really, can it?) it's pretty pleasurable to think about how it can go oh-so-right.

"The cut is crucial. There's a certain width that's just fits in your palate and the cheese sticks to the roof of your mouth," says Laurel Harrington, who's owned Freeman's Little New York for 18 years. "If it's too big it doesn't fit in the cup of donair sauce and if it's too little it doesn't hold the cheese, it slides off with the garlic butter." She estimates that the garlic fingers recipe she inherited is at least 40 years old, maybe older considering the restaurant is knocking on 60. It's a seemingly simple concoction of freshly made, freshly baked dough, smothered with garlic butter, covered in Saputo cheese and paired with Freemans' own donair sauce, made daily, but as it turns out there's a science to garlic fingers. A mouth-watering kind of science.

"We're big on thick crust because it scoops the donair sauce and holds it. Especially on delivery, the thinner crust can really not hold up as well," says Harrington. The cooks steer clear of raw garlic—they sauté theirs in butter to keep its punch but avoid any bitterness. And she says while lots of cheese is important (her fingers are called Exxxtra Cheesy) there is such a thing as too much.

"There's a certain amount of cheese where the dough won't cook, so we definitely have to be aware of how many ounces you're putting on otherwise you end up with a really gummy layer," she says. "It's a fine line. Too little cheese and people get so sad...they come to you for this mood, this feeling, this product and if you don't meet it, it breaks their heart. It's the same with poutine."

It's true. That comforting, nostalgic sensory memory is why people use their old, hometown favourite pizza or garlic fingers as a precedent, comparing all others to it whether it's the best or their best.

This is why Harrington ends up making garlies for her far away family for Christmas, or shipping them to longing Nova Scotians living outside of province. "We had a gentleman that did his MBA at Dalhousie and was having his bachelor party in Toronto and we froze them, shipped them overnight courier and he had a pizza place there finish them off," she says. "There's something about the garlic finger that's very nostalgic, very chicken soup, mama's cooking for people."

But in the end, Harrington says, the biggest reason this social plate is so widely loved comes down to the company you keep while you're indulging.

"Why you're eating them is why the garlic finger is such an important part of your memory. Because you don't sit home alone and scarf down garlic fingers, that's not usually how people remember it"—though we don't judge—"they remember it as the night they were out celebrating, or when they were feeling sad and came down here to lament in their pajamas, with their hair on top of their head in a bun, eating garlic fingers with a glass of wine," says Harrington. "It's that moment that the garlic fingers consume, and just that hot, buttered, cheesy bread thing that makes that moment suitable."