The Awesome Foundation presents the craziest tug of war ever. HFX TUG, you against a 160 tonne tugboat.a 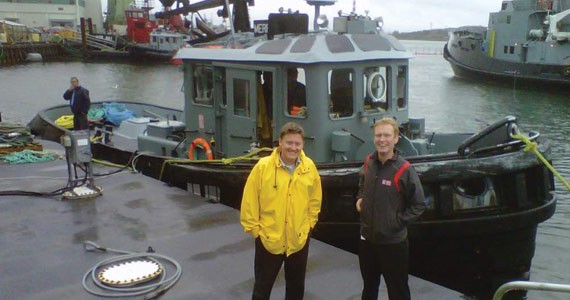 Blame it on the beer. It was over a pint or two on the waterfront that the Awesome Foundation's Mike Kennedy and Dave Finlayson got creative and started dreaming up ideas for seemingly ridiculous tug of war bouts. When Dartmouth versus Halifax was ruled impossible they moved on to something bigger, and weirder. A tug tug. It would still be a battle between two teams, but instead of tugging each other...they'd tug, you know, 160 tonne navy tug boats. Though the idea didn't fit into the Awesome Foundation's grant process, they ran with the it. "The next thing I know we're sitting in the boardroom at Waterfront Development with people from the navy," says Kennedy. And the rest is history for HFX TUGS, which takes over Queen's Wharf this Saturday afternoon when two massive navy tugs, tied onto 600 foot ropes, will be idling 300 feet out in the harbour. The challenge? See which team boasts more brawn when the horn blasts. It'll be a best of three competition to see who gets their tug closest to the dock the quickest. It's quite possible that this will be the first tugboat tug of war, ever. The Awesome Foundation is hoping to have 100 strapping folks (that's you) on each team, and Kennedy suggests you bring pair of gloves and warm up with some pre-tug deep squats.