Get political this Saturday night at Nocturne 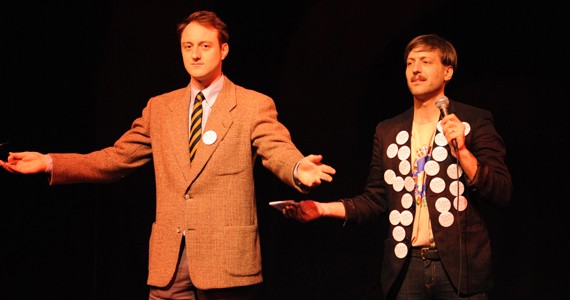 Team Citizen wants you! Henri Fabergé and his crew are planning an open-source political party game and you're invited to attend. Team Citizen wants to destabilize the status quo and affect positive change. "We are inspired by the failing institutions currently oppressing us all," says Fabergé. "The desire to replace them with a system that is fair, open and transparent." Although Team Citizen will begin with two artists they hope it won't stay that way for very long–the goal is to provoke mass participation. "We're facilitating the exchange of ideas to collectively build a new social movement," says Fabergé. "Because of its open concept, the way participants shape the project could take it in any direction."

Perched at the helm of this new social movement is someone who isn't shy about leading a pack or basking in the spotlight. Fabergé is a character-and-a-half whose presentation is as ornate and ostentatious as his name suggests. Frontman for Henri Fabergé and the Adorables, nowadays the former Kensington Market, indie-rock golden-boy is cultivating his passion for politics inside university classrooms and out of them. Fabergé is a first-year political science student as well as a consummate and flamboyant advocate for social and political change. If you're ready and willing to help Fabergé engineer some subversive sociopolitical change then make sure to join Team Citizen at the Bus Stop.