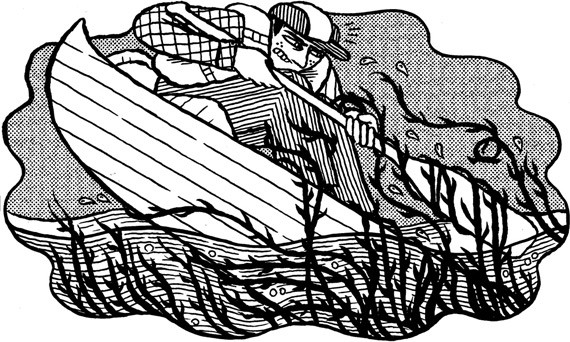 The city could spend hundreds of thousands of dollars pumping herbicides into some of Halifax's busiest freshwater lakes, all to get rid of some annoying weeds.

At issue is an excessive plant growth in both Lake Banook and Lake Micmac in Dartmouth. Home to beaches, boat clubs and plenty of swimmers, the lake's weeds have been increasingly a nuisance since 2009.

A recent assessment of the aquatic overgrowth, prepared for the city by Dartmouth's Stantec Consulting, recommends three options to combat the pesky plants; herbicides, "mechanical harvesting," or dredging.

No option is cheap, but it's been incorrectly reported in other media that the chemical option is the least expensive. According to the report, herbicides could be purchased and implemented for an estimated $36,000 to $119,000 per year. The treatment would require annual doses for several years to be effective (the report recommends "more than five"), meaning the city's looking at a cost of between $216,000 to $714,000 for six years.

Mechanical harvesting, which uses submersed reciprocating blades to mow up the weeds, can be paid for two ways. The city can buy the equipment outright and have municipal staff do the chopping, or they can hire a third-party company to handle the clean-up. The first option is a one-time cost of $100,000 to $300,000. The second will run between $20,000 to $25,000 for the same six years or more.

The Chronicle Herald reported that contracting that job out would cost "$182,000 a year." Putting aside the very generous estimate of what a tendering process will ultimately cost, there's no reason council can't direct staff to issue a multi-year tender to the winning company for the five to seven years the lakes will need to be treated.

Dredging the bottom of the lake isn't a realistic option, as its price tag comes in between $645,000 to $1 million and significantly disturbs the ecosystem.

Assuming a worst case scenario where everyone is terrible at their jobs, mechanical harvesting will cost the city either $300,000 outright, or $350,000 over several years. Pumping herbicides into the freshwater where children swim will cost the city more than $700,000.

As the Stantec report notes, mechanical harvesting carries the lowest risk and requires the least amount of government and environmental oversight. That's probably why, out of the three options present, it's the one favoured by the Ecology Action Centre's water coordinator, Jocelyne Rankin.

"We are a city that has historically been anti-pesticides," she says. "The citizens of HRM are really knowledgeable about the impact pesticides can have on our ecosystem. It doesn't make any sense for the city to be considering putting a herbicide directly in our waterway."

"The use of herbicides is very strongly regulated by the provincial and federal governments," counters Cameron Deacoff, environmental performance officer with the city. "There's very strong regulations both on the kinds of herbicides that can be used as well as the conditions of uses and application."

Deacoff says if council does choose the herbicide option, there will be plenty of public engagement and advance notice to "ensure public safety."

Still, there's other problems with spraying chemicals into the lake aside from keeping swimmers out for several days while the water is still toxic.

Unlike mechanical harvesting, where the chopped up plants are collected and disposed of, the herbicides will leave that dead, decaying matter at the bottom of the lake. The result could not only promote further weed growth, but risks reducing oxygen levels to the point that other aquatic life begins to die off. Algae blooms and soil erosion are also complications the Stantec report foresees.

"Public perception and acceptance of this approach may be a barrier," the report helpfully notes.

None of these options gets at the root of the problem, if you'll pardon the expression. The increased runoff caused by nearby industrial work, including the lowering of Lake Banook to accommodate new sewer pipes in 2009, is what got the city tangled up in this mess.

In an open letter posted to the Ecology Action Centre's website, Jocelyne Rankin highlights how short-term solutions to those pesky weeds are a band-aid to the changes happening in our aquatic ecosystems. She suggests developing a constructed wetland, where excess storm water runoff can empty out instead of pouring directly into the lakes.

"Slow down the storm water," she says. "Spread it out and let it sink into the ground."

Though the Stantec report stops short of pinpointing a specific cause to the changes in Lake Banook, it's in agreement that Halifax needs to develop long-term solutions to its freshwater management problems.

"A reduction of sources from developed areas can be improved through improved maintenance or enhancement of storm water management infrastructure, vegetation of bare areas, and a replacement of impermeable surfaces with materials that enhance infiltration."

Mimicking the natural water balance will not only help restore the lake, but likely avoid future discussions about herbicides in our waters.

Whatever the long-term fix, the short-term solution isn't likely to be implemented this summer. There's still no motion or recommendation for council to discuss, let alone vote on, when they return from summer break at the end of the month.

The perennial slender-leaf and clasping-leaf pondweed that currently clogging up shallow areas of Lake Banook and Lake Micmac will keep growing until the end of August before dying off for the winter.