Province argues it will impede development of the historic downtown property. 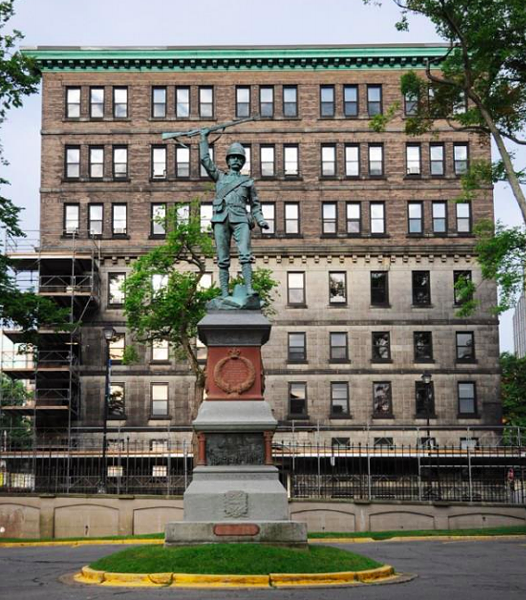 Halifax’s Heritage Advisory Committee voted this week to move forward with a third-party application for preserving the historic Dennis Building, going against the wishes of the property’s owner—the province.

Paul Armstrong, on behalf of the Maritime Institute for Civil Society, has applied for HRM to include the location at 1740 Granville Street as a municipal heritage property.

The 155-year-old Dennis Building, located on the corner of Granville and George Streets, was constructed in 1863 to house dry goods. It was purchased by William Dennis, owner of the Halifax Herald, in 1900, and has survived a devastating fire and the Halifax Explosion.

The government of Nova Scotia eventually purchased the building for office use. In 2013, the Dennis was evacuated due to safety concerns regarding mould, although a later analysis found the mould levels were lower than what’s found outdoors.

In 2014, then-minister of Internal Services Labi Kousoulis stated the building was beyond repair and the province began a process to sell off the Dennis and the neighbouring Acadian Recorder building for redevelopment.

But earlier this year the of Transportation and Infrastructure Renewal changed course, cancelling efforts to sell the property and instead asked five short-listed developers to submit plans for a long-term lease redevelopment. The tender issued by the province for that leased redevelopment says the building’s granite facade must be preserved.

Shannon Delbridge, executive director of public works for TIR, says a heritage designation will do more harm than good when it comes to protecting the Dennis.

“The province is making every effort to ensure that the Dennis Building the heritage look and feel that is appropriate for this area of Halifax,” Delbridge writes in a letter sent to HRM in opposition of the heritage motion.

Adding the Dennis to the municipal registry of heritage properties will “do no more to ensure the Dennis Building maintains its heritage character than what the province is currently doing,” writes Delbridge, “but instead will impede the development of a very important piece of the downtown Halifax core.”

Placing a building under the Heritage Property Act is designed to help protect and conserve both it and the surrounding area while opening up new funds for renovations from the city.

Christine Macy, dean of architecture at Dalhousie University, says the upkeep that’s involved to maintain a century-old building can be difficult without heritage protection.

“If an old building has mould and rats, it is very difficult to meet the housing expectation—you often can’t,” she says. “Here in Nova Scotia, the financial and incentives are non-existent. There are more financial incentives to tear things down and make parking lots than there are to keep old buildings up.”
Armstrong, on behalf of the MIRCS, said in a statement to the HAC that the application is “not a matter of being anti-development at all.”

“The land beside the Dennis Building is underused right now. We don’t have any objection to there being development on that land—it’s appropriate that there’s development—but it needs to be something that’s complimentary to Province House.”

The public hearing has yet to be scheduled.