The art and design duo creates pieces that reflect their Mi'kmaq heritage. 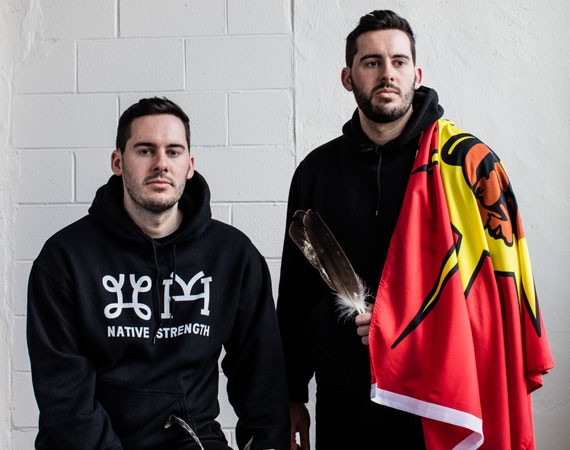 While attending post-secondary school in New York, Chris and Greg Mitchell were surprised to learn that many of their schoolmates didn't realize Indigenous peoples still lived in North America.

"A lot of them think Native Americans are extinct," says Greg.

"Most people think it's, you know, the Hollywood idea—big feather headdresses and stuff," adds Chris.

The Mitchells are twins of Mi'kmaq heritage. Both are artists, both are musicians. They wanted to showcase what Mi'kmaq culture "is actually like." When returning to Halifax between semesters, Chris and Greg looked to buy Indigenous-made art for their friends in New York, but everything they found was either inauthentic, "made in China" or expensive beadwork. In 2015, they decided to add their own work to the market, collaborating to create a line of products called Born in the North.

In creating their designs, Chris and Greg use Mi'kmaq hieroglyphic writing in an effort to bring awareness back to the symbols and language, with clothing depicting phrases such as "native strength." They also design pieces using triangular lines and double curves, in accordance with "the way clothing was made and decorated" by the Mi'kmaq. As far as illustrations go, their art style is inspired by contemporary European illustration and tattoo flash art.

"There's no true Mi'kmaq painting," says Chris. "It's all based off textiles and beadwork."

In addition to sharing the business as a whole, the brothers often collaborate on individual designs. Chris might start a drawing, and hand the reins to Greg if he gets stuck on something, or vice versa. They admit to butting heads occasionally, but Chris says, "You just gotta trust each other on some things."

"We're always working on multiple stuff at a time," says Greg. "So it's like one person will finish a painting while the other starts products for our store."

The Mitchells have spent a year and a half searching archives and scouring online for hieroglyphs and petroglyphs, and they hope to create a handbook from their research so other people don't have to do the same.

"A lot of people don't have access to that. They don't know where to find it," says Chris.

At the moment, the brothers tend to divide their time between the business and freelance gigs—they're also in two bands together, one of which had a song on the season three premiere of Broad City. They'd eventually like Born in the North to become a full-time job, bringing "awareness and pride" to other Indigenous youth.