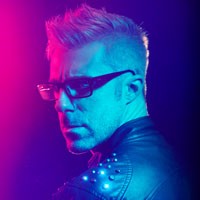 James White's artistic endeavours have caught the eye of Ubisoft and Google, but he gets more attention from the United Kingdom and United States than from his Dartmouth home. White started Signalnoise Studio in 1999, where he now designs works of art largely inspired by aesthetics from the 1980s, the decade of his childhood.

"I grew up drawing, so when I got into the web and design industry, I never stopped making stuff," says White.

Signalnoise really began gaining momentum in 2007, when White's own blog started getting featured on international design blogs. White says he'd been "trying to find my own little corner of the internet," which led him to experiment with styles of the '80s: Tron grids, rainbows and chrome text. As a lover of Transformers, GI Joe and "old-school video games," the appeal to retro made sense for White.

"I just kind of found my niche—a style that really sort of suited my sensibilities."

The style got attention from an online audience, and that's when creative directors for bigger clients starting knocking on the proverbial door. In the last six years, White has given 65 talks at various design events and conferences around the world. "I'm the only goofball doing '80s chrome stuff," he says.

The most fun White's had working with a client was his role in Ubisoft's Trials of the Blood Dragon, a spin-off of Far Cry 3 and the Trials racing game series.

The creative director wanted the game's design to look akin to an action film from the '80s, so White was an ideal fit. He designed the logo, a promo poster and the game's box art.

"It was a video game that brought all those kind of action movie staples together," says White. "I'd love to work on it again."

Familiar faces from pop culture have often shown up on White's work—Superman, Robocop and Han Solo, for instance—but he's done his fair share of original design as well.

One of his most recent projects was spurred by the feeling that "the world is kind of going into the toilet lately." More specifically, he was inspired by the "rogue" Twitter accounts that have been popping up in response to the Trump administration's silencing of government scientists.

White reached out to Rogue NASA with the offer of a logo he'd created for them, and they accepted—his design is now displayed on their Twitter avatar. White also worked with Cotton Bureau on a Rogue NASA t-shirt, enamel pins and embroidered patches, with proceeds going to charities such as Girls Who Code and the National Math + Science Initiative. 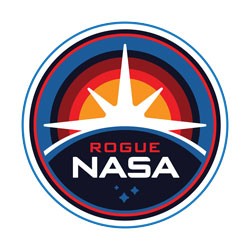