In a era of online over-sharing and follow requests, it’s both harder and easier to nurture and nix friendships. 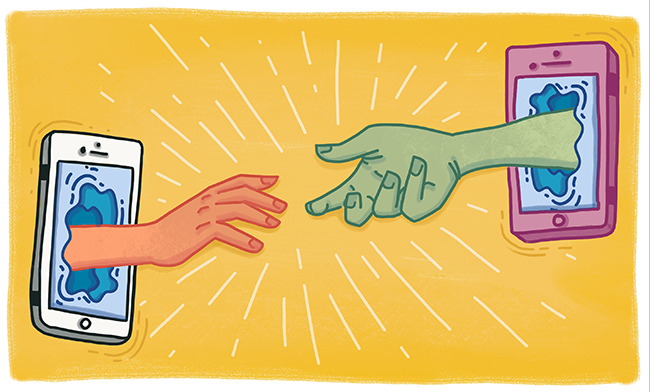 My first breakup happened the summer before grade nine. I answered a late-night phone call from my best friend, who told me matter-of-factly that I didn't have the social capital needed for her attempt to launch herself amongst the popular girls. We could, she offered, still hang out outside of school, but lunchtimes discussing weird books from the library were suddenly over.

In some ways, the parts that felt the worst about the call—the naked social-climbing ambitions, the condescending offer of secret friendship—were what made it bearable: At least now I knew who she was, or who she was attempting to become. It made room for me to cooly decline before hanging up my purple cordless phone and very un-cooly sob hot tears.

It's fair to say she handled outgrowing our friendship terribly, but what, exactly, is one supposed to do when a friendship becomes too tired and small for one party?

Life is a revolving door—a rotating cast of characters. In pre-social media days, maintaining bonds may have taken more work (think writing and mailing physical letters or making an honest-to-god plan in advance rather than just texting the squad). Through this, the withering of a goodwill branch between two people will have perhaps been more natural: The letters eventually become fewer, the effort to make plans too insurmountable.

Aristotle wrote in his OG self-help book The Nicomachean Ethics that there were essentially three types of friendships: Friendships of utility, friendships of pleasure and friendships of The Good (AKA relationships that benefit you, ones that are a rollicking good time and ones that help you be your best self). This came long before the rhyming cliche that people will stick around for "a reason, a season or a lifetime," but in the social media age, these neatly-drawn boundaries feel like warped threads, curling and unravelling: How many of your followers are actually your friends? How many people's life updates do you scroll past and "like," feeling as if you're up-to-date on their world? How many messages lay un-replied to in your DMs, growing digital moss?

The ping of a friend request is the sound of potential: To know someone better, to forge a bond, to extend a fun lunch pal at a weekend conference into a true friend. And on rare occasions, it works. One of the coolest women I know I met at a party, added on Facebook and then quickly became close friends with. (She's since moved away, though, and I owe her a message from over a month ago. The digital moss is thriving.)

In a pre-social-media, more-active-effort world, the boundaries were clearer. You still liked someone, but hadn't spoken in years. You didn't see their Instagram engagement announcement so there was no pretending that you were closer than reality. Digital doors are harder to close—and also, as though paned with glass, they allow us to feel like we're still connecting while we merely passively observe.

If friendship is a plant that needs to be well-watered, the health of our bonds with others in an age that allows the work to be so performative must come into question. No amount of double-taps or half-hearted Skype attempts equals a genuine catch-up session—even though, paradoxically, all these new ways to connect should mean it's easier to keep people in your life in a meaningful way.

And health comes into play in other ways. As we lay in our athleisure, tracking our steps, the idea of well-being has become more nuanced. It's no longer enough to floss, experts have ideas on how to optimize all corners of our life—including friendship. Researchers warn that social health helps protect the brain from decay in old age. Each connection formed with another person is an added strand of silk to the spiderweb that is your brain's neural network. Growing close with someone laminates a particular strand to newfound strength—but a too-small web could hold a potential link to age-related diseases. Suddenly, your 1,000 Facebook friends seem like a great insurance policy not only against feeling unpopular, but against the withering effects of time.

Meanwhile, sociologists also explain that there is a maximum number of people our brain can hold onto at any one time. If our brain is a book that can only hold so many portraits, the passivity of our social media connections begins to make more sense—perhaps your friends list is literally too long for you to keep up with in an engaged way.

So how do you make the decision to cut someone loose? Adulthood decisions, after all, are rarely as clean-cut as who to sit with in the school cafeteria. Mindful scrolling may be the easiest start: When you see someone's latest status update, thinking about the last time you actually talked—and sending a thoughtful DM if you wished you talked more—is a bridge towards re-connecting. And, for the others on your friends list, perhaps letting the lack of direct contact speak for itself is best.

But what do I know? Four summers after that phone call from my best friend, I sat on my dorm bed, checking Facebook. A friend request from her—without an explanation as to why she was resurfacing—popped up. I accepted the request.