Take this summer to study the parts of NS history you never learned about in school. 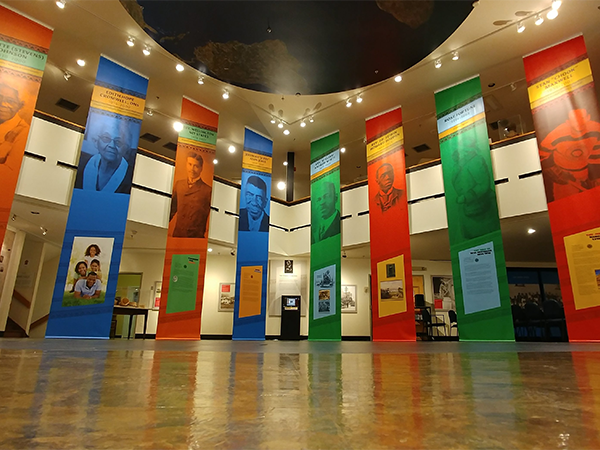 Black-led organizations have been working for years to fill in the gaping holes in our history left out by school curriculums. Now is a crucial time to un-learn and re-learn how we arrived at this point in history.

In Cherry Brook, the Black Cultural Centre for Nova Scotia—the province's only museum dedicated 100 percent to Black history—reopened on July 6 with COVID-19 precautions in place. The Centre's Executive Director, Russell Grosse, says it's seen increased interest thanks to recent attention to the Black Lives Matter movement. "When you look at the Black communities that are here in this province, there are over 52 Black historic communities in Nova Scotia, they date back well over 400 years," Grosse says.

There's a one-way route through the exhibits to encourage physical distancing and the topics on display range through four centuries of Black history in Nova Scotia, from the African slave trade in Canada to Black loyalists to Jamaican maroons to the arrival of Caribbean workers in the Cape Breton coal mines. "Nova Scotia is known as the birthplace of Black culture and heritage in Canada," says Grosse.

Other museums like the Africville Museum (5795 Africville Road) and the Black Loyalist Heritage Centre (119 Old Birchtown Rd Site 10, Shelburne) in Shelburne focus on more specific stories, but the Cherry Brook museum tells several important stories one by one.

"All of those migrations that came through, they came through with a purpose to serve or to be a part of conflict, to help at a time whether it was a war or some sort of conflict," Grosse explains. "And through that adversity those communities became successful communities and contributed to the building of Nova Scotia and this country as a whole."

The stories focus on how Black culture intertwines with Canadian history, like the Colour of Hockey exhibit that features teams like the Halifax Eurekas and the Africville Sea-Sides. "It helps people realize that although we're different, we're very similar, and I think that helps to break barriers and create a path for folks to understand each other in a better way," says Grosse.

The Centre hopes the stories and exhibits can provide a deeper context of historical figures for everyone interested in history, but also give people of African descent a sense of pride and accomplishment.

"It creates that passion and pride, that people of African descent have made significant contributions here in this province, and have made Nova Scotia home, and that being here for multiple generations and being thriving communities that were even in place prior to Canada's confederation," he says. "That really reinforces our sense of belonging."

For others, the centre is a good place to work towards being a good ally. "We understand that the recent increase in awareness and knowledge of race-based issues across this country, across the world, that the Centre will be an important vehicle for people to learn more and get a greater understanding," says Grosse. "And we're glad to be able to reopen for folks to experience that."