Home of the future

Susan and Brainard FItzgerald’s modernist house stands out in Halifax’s north end, but that’s because it was built with the next 100 years in mind: to be a smaller, dual-purpose space for work and living. 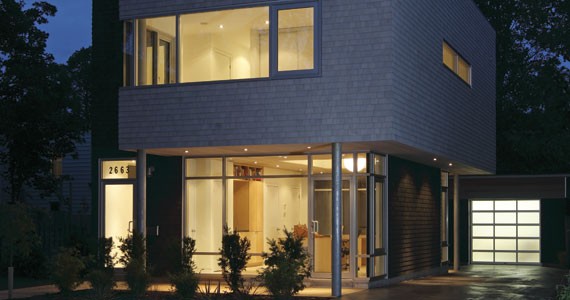 Architect Susan Fitzgerald conceived of this building as “two clearly defined wooden boxes---one black and one grey that intersect with each other.” She looked at the residences on the street and was inspired as much by them as by her own modernist sense.

“A lot of it’s about integrating with the landscape and the urban environment,” she says. “Very much trying to draw from what’s good about what’s around the place. This is just one example of a line of inquiry.”

Fitzgerald, a UK native interior designer and architect, and her partner, Annapolis Valley-born builder Brainard Fitzgerald, have been designing and renovating homes for 20 years. Other examples of their work can be seen on Bridgeview Drive off Purcell’s Cove Road and on Elm Street near Quinpool Road.

They all share a geometric similarity in the way they interpret the space, but the utility of the Fuller Terrace house, anticipating the way we will be living in the future, is as important as its bold aesthetics.

While it cuts a modernist scythe through the stately row-house sameness of the block, a startling expression of forward-thinking design, it imagines what Halifax will be like at a time changed by environmental concerns and higher energy costs. A time when density on the peninsula will be much higher than it is now and zoning will accommodate people wanting to work where they live.

Witness the open concept main floor. A workspace, its flow-through appearance is created by polished concrete floors and floor-to-ceiling windows at the front and back. A staircase running up the north side of the house leads to the second floor; two rooms at each end, connected by a small washroom and shower room, separated by an open space, the ceiling of the office below extends up to the second floor and a light-giving south side window.

A second set of stairs leads to the third floor great room, a kitchen and living space that feels like a tree house, surrounded by decks on three sides. Again, enormous windows at both the east and west sides.

In the rear exists a garage that could easily be converted into a carriage house, where someone could live in it, zoning regulations allowing.

“In Vancouver and Toronto they allow laneway houses. We thought we might do it here,” says Susan. “This project is about potentially, in the future, getting that kind of density.” The building’s footprint is quite small: including the office space it is only 1,750 square feet. “It’s very little,” she says. “In a way, people don’t need a lot of space to live. People build these 3,000 square foot houses, but really they only occupy 1,200 square feet. It’s trying to be sustainable by living smaller spaces, that’s the idea behind it.”

The “transparent” office space is considered a home office, not a storefront, which would contravene the current bylaws for the street. Susan and Brainard have rented the house to someone who uses it as his home office.

“This house is an approach to how people live and work in a place and making it a different kind of living and working arrangement,” says Susan. “I think it would be great if a lot of people had places like this where you live upstairs and come down” to work.

The home was completed in August of 2010 after eight months of construction. Brainard estimates that it cost around $235 a square foot to build---about $400,000. He says the demand for modern architecture certainly exists in Halifax, but the expenses that come with custom touches must be anticipated. “People have to see the value in shingles,” he says, pointing out that theirs are eastern cedar. “It would cost you $5,000 or $6,000 to put vinyl on a house this size. It costs 10 to 15 times more to put shingles on it. There has to be a perceived value in there somewhere.”

While the house is heated electrically, the couple say the surfeit of windows and concrete make for a surprisingly heat efficient structure. “It’s not to be underestimated how much you get from passive solar and concrete floors,” says Susan. “The heat gain you get, it radiates out. It works really well in houses.”

Susan teaches sessionally at the Dalhousie School of Architecture, and has heard plenty of positive reviews of the Fuller Terrace home from recent graduates and students who live in the area. She heard some concern amongst the neighbours as to what kind of building was going up here, especially when they first saw the steel girders lying in the yard. “People couldn’t imagine what it was going to look like,” says Susan.

She recalls author and urban activist Jane Jacobs, who “talks about urbanism. You want things from different times and periods popping up but in some ways having similar language that works in the grain of the street. But people who’ve been through it have been really enthusiastic. They like the shingles, and feel that somehow it fits. It doesn’t feel that alien.”