Homebrew’s where the heart is 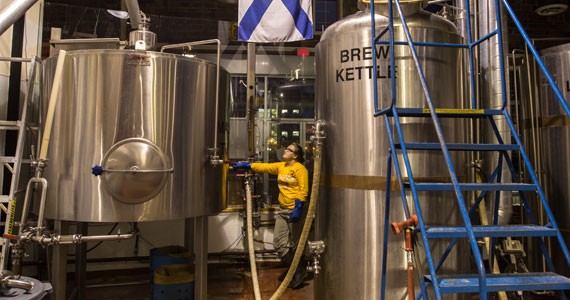 "It can be impossible to drink a bourbon barrel-aged Russian Imperial Stout in Nova Scotia unless you brew it yourself, and that's the crowd I am firmly planted in," says Chris MacDonald of the Brewnosers Homebrew and Beer Appreciation Club.

He, like many of the group's 200 active members, has been preparing over the past several weeks for this year's annual Ultimate Brew-off, presented by Garrison Brewing Co. and Noble Grape. "It is an ode to homebrewing from Garrison, as Brian Titus began his brewing career as a homebrewer," explains MacDonald. Now in its fifth year, the Beer Judge Certification Program-certified homebrewing competition received a record number of entries (69!), making this the fiercest contest yet.

At the end of each calendar year Garrison puts out a call for entries to Atlantic homebrewers, giving them about three months to brew a 20-litre batch of a predetermined beer style---one the brewery is not currently producing. Past styles have included a standard bitter (Harvey's Bitter, 2009), a Belgian witbier (Nit-Wit, 2010), a schwarzbier (Adam and Eric's Schwarzbier, 2011) and a rye IPA (Citra and the Rye, 2012). After passing through three levels of judging---the last of which takes place during a special gala event at the brewery---the winner receives bragging rights, and spends the weeks prior to the next year's gala event reworking and then brewing their winning entry with Garrison's brewmaster Daniel Girard, after which it gets bottled, labelled and stocked on the shelves of Garrison, private stores and about one-third of NSLCs.

Nit-Wit, the winning 2010 beer baby of Scott Tilford, has created such a following that Garrison has released it as a spring seasonal every year since. But Nova Scotians aren't the only fans. Nit-Wit brought home silver at the 2011 Canadian Brewing Awards in the French and Belgian Style Saison category, flanked by Great Lakes Brewery's Deliverance Saison (gold) and Beau's All Natural Brewing Company's Patio Saison (bronze).

Tilford, an avid homebrewer, has continued to enter the contest since his big win. When this year's style, Belgian blonde, was announced he gathered up some brewing friends to do some research. "We didn't know what to do, so we sampled some," he says. But that's the whole point, according to Tilford: "We all have things we like to brew, but it makes you get out of your rut." And as for the Brew-off itself, "Winning the event is great for bragging rights but spending the day with Daniel [Girard] is a beermaker's dream field trip."

And Girard has a new apprentice this year. Kellye Robertson of Lunenburg spent her spring break from her last semester at the Brewmaster and Brewery Operations Management program at Niagra College driving to Nova Scotia to prepare her winning beer from last year's competition. In preparation for this year's gala unveiling, Robertson has been brewing her winning Rye-PA with Girard over the past few weeks.

"He's just a wealth of knowledge. To be able to pick his brain is invaluable," she says. "Working with someone who's still so passionate about beer is so great. It's Day One for him every day. If you don't already love it, you want to."

Robertson's take on the rye IPA style includes "a super-high rye percentage," with the initial recipe calling for 40 percent. "We had to back it up because the rye would have made the mash gummy," she explains, "so it's at about 36 percent rye." With an expected ABV (alcohol by volume) of between 6.5 and 6.7 percent, as Robertson says, it's "high enough to make it interesting...not super sessionable, but middle-ground."

As for the beer's name and label: top-secret. "Not even Kellye knows, and it's driving her crazy!" laughs Titus. As per Brew-off etiquette, last year's winning beer will be officially unveiled during the gala, complete with samples for attendees. And Robertson can't wait. "The gala's awesome if you're a beer nerd...it's a collection of all the beer nerds in the city in one room for one night!" Tilford won't miss it either. "I look forward to it every year," he says. "One guy I know just brewed a batch so he could come."

The gala will take place at the Garrison Brewery (1149 Marginal Road) on March 21 where this year's top four Belgian blonde entries will be judged by BJCP-certified judges. Plenty of samples will be consumed and, according to Titus, Girard plans to do some "spring cleaning," and will be sharing a few liquid trinkets from his secret stash. "You never know what kind of surprises come out on that night," he teases.

With two tickets given to each contestant, space is at a premium. But a limited number of tickets will be available at the door.

Just brew it
Start your own operation with the help of these guys.