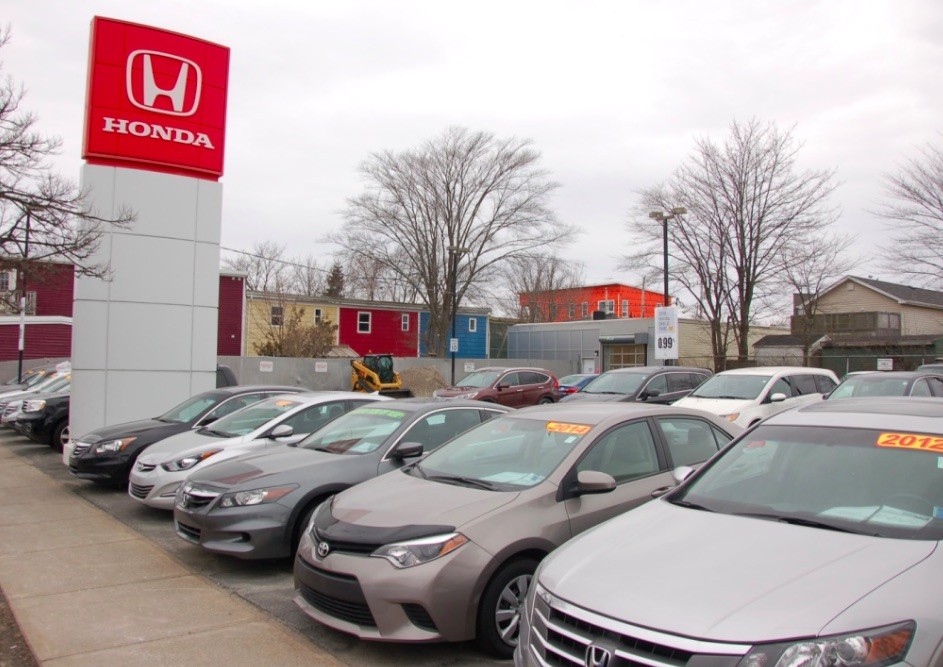 The Facebook group Homes Not Hondas is conducting a social media campaign and heading door-to-door to get the word out about the project, though it remains to be seen if that rallying will have any impact on Steele’s plans.

As The Coast previously reported, Rob Steele has been quietly buying up properties around his new Colonial Honda dealership for the last several months. Representatives from Steele Auto Group confirm that demolition permits for 19 residential properties have recently been issued for what appears to be an expanded parking lot.

“In our business we are challenged by space requirement to display vehicles and to provide parking for customer services,” writes Steele president and COO Dave MacRitchie in an email.

“We’ve considered many options in terms of expansion so as to relieve space constraints. We’ve invested significantly in the business and the properties to expand our parking and display area to better serve our customers, with designs and green buffers that are mindful of the residential component of our neighbourhood.”

“The main reason, I think, is they need more space for cars,” says Mark Butler, director with the Ecology Action Centre. The EAC recently moved back into the organization’s renovated headquarters on Fern and May Streets, which sits across the street from where Honda’s expanded parking lot will soon stretch.

“It’s not really a healthy thing for a neighbourhood that already feels encroached upon,” Butler says. “It’s also against what we thought was a stated goal of this city, to increase the density on the peninsula.”

One structure that won't be demolished is the property on the corner of Robie and North Streets. The current home of the Woodbury Animal Hospital was purchased by Steele's Dynamic Properties, but MacRitchie says no changes are planned for that piece of real estate.

The Steele COO acknowledges some of the neighbours aren't happy about what his company is planning.

“I understand that some residents have expressed a reluctance to change," he says. “Our plan is before HRM and we are waiting [on HRM's] feedback prior to meeting with any additional residents.”

Chelsi Ferguson is one of those people with a “reluctance to change,” as MacRitchie puts it. She lives in one of the colourful row of May Street houses that didn’t sell to Steele. Ferguson bought the house with her partner two years ago as an affordable home on the peninsula to raise their two children, aged one and six.

“We had a really big vision for our future in that neighbourhod,” Ferguson says. “This is not at all what we pictured happening.”

Aesthetics aside, the expanded parking lot will undoubtably have an impact on property values for those who didn't sell .

“Who’s going to want to live in a car dealership?” asks Ferguson.

Unpopular as it might be, however, Steele Auto Group appear to be perfectly within its rights to tear down the neighbouring structures. The properties are zoned C-2, which allows the car dealership to demolish the houses without any public consultation. 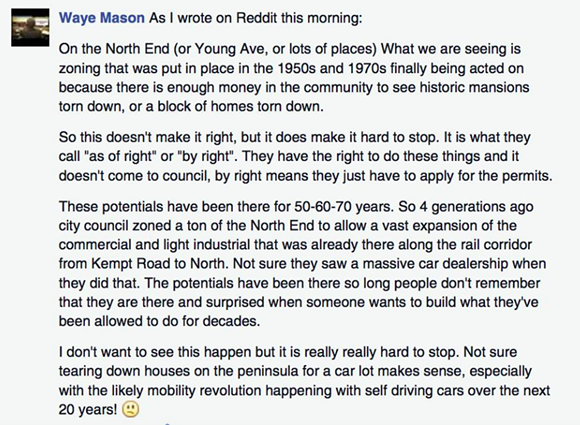 But some Homes Not Hondas members are hoping community pressure will be enough to halt Steele’s wrecking ball.

“Only vigorous community opposition will prevent this project from going forward,” the group writes in a news release. “The car lot is inconsistent with the intention of the Centre Plan to create attractive, walkable streets with high quality design in the urban core.”

The group is recommending using social media to voice concern directly to Honda and Steele, emailing city officials and heading out for some good old-fashioned neighbourhood door-knocking to get the word out.

“All of the north end are coming together to say this is not the vision we have,” says Ferguson. “This is the most inappropriate location for this dealership.”

A community meeting open to supporters will be held this Wednesday at 5pm in the Ecology Action Centre (2705 Fern Lane). Demolition on the properties in question is expected to commence in May.