Hope and peace in Washington

Our correspondent goes to post-inauguration DC to report from the mother of all Women’s Marches.

“There is just…a lot of people,” a woman sandwiched behind me blurts out, putting into words what each of us is surely thinking.

Of course, it fails to fully deliver meaning, just as the words I am writing will fail. Fail to encapsulate the crackling energy, the swiftness of movement and the raw, desperate, raging, hope-driven groundswell that lifted the Women's March on Washington into being.

I’m standing smack dab in the middle of what must be 50,000 people—and beyond that—countless more.

Just an hour before, riding in on the train with my friends, you couldn't shift your foot, or raise your arm, without unintentionally striking someone. The Metro was a sea of pussy-hat-wearing women. (And some men too. “Real men wear pussy hats,” I told one guy, his shoulders stretching back in pride, as his partner looked on, smiling beamingly, that kind of smile that shows all of your teeth.)

At one point someone starting singing Happy Birthday on the train and the chorus of enthusiasm and impishness that erupted could only be matched by the last drunkest round of Auld Lang Syne—though it was not yet 9:30 on a Saturday morning, and aside from couplings and little groups of three or four, we were all strangers to each other. To hear that rousing verse it would be easy to mistake us for lifelong friends or even family.

Every time the train pulled into a platform, there were dozens and dozens of women wearing pink knitted and crocheted hats. They raised fists and cheered, though they knew what was coming, as we left them in our wake, the trains beyond capacity.

In the crowd, thousands of us, just before Jefferson and 4th Streets and the National Museum of the American Indian (where eight or so adventurous types loped from the black steel sign adorning its curving wall), strained to hear the voices of the speakers on the Jumbotron screen about half a city block ahead of us. Though we tried, a woman next to me cupping both ears, as if she were doing an impression of an angry Dumbo the elephant, try as we might, we couldn't hear, and the determining, intoxicating presence of the moment fell into the mundane.

After becoming distracted by a sweet batter like smell that had drifted into the air, I finally broke. "Do you smell waffles?" I asked a gregarious Black woman, about 5-foot-2, and maybe 50 years old, standing next to me.

“Chicken” she said, zeroing her gaze in on me as if we were sisters plotting a prison escape.

I did smell chicken. Fried chicken. And it smelled fucking delicious. But where the hell was it coming from?

“Chicken and waffles,” I shrugged, staring at my new best friend, longingly, flatly.

“Just don't let me see it, honey,” she replied, a tone of authoritative warning drawling through her, then exploding into a joyful, musical laugh, shared only between the two of us.

Ten minutes earlier, with a combination of pre-emptive I Love Lucy performance apology—and maybe a spark of mischief—I told the crew I came here with that I wanted to see if I could get in closer. And though I'd only met two of them just a few hours earlier, they nodded generously, as if they'd witnessed not one but both of my labours and knew every secret I might or might not have had. I told them I'd be back, not knowing that the tree I'd left them at, right on Jefferson, still with enough space for people to meander to and from, would soon be packed tighter than a perfect high school joint.

Gloria Steinem is on the mic now. Her voice and the image don't align, though. The screen is glitchy, turning into a graphic of shades of pink squares, like a paint swatch—the hats—dotting the crowd. All the while, it feels like watching a movie in a foreign language with no subtitles. 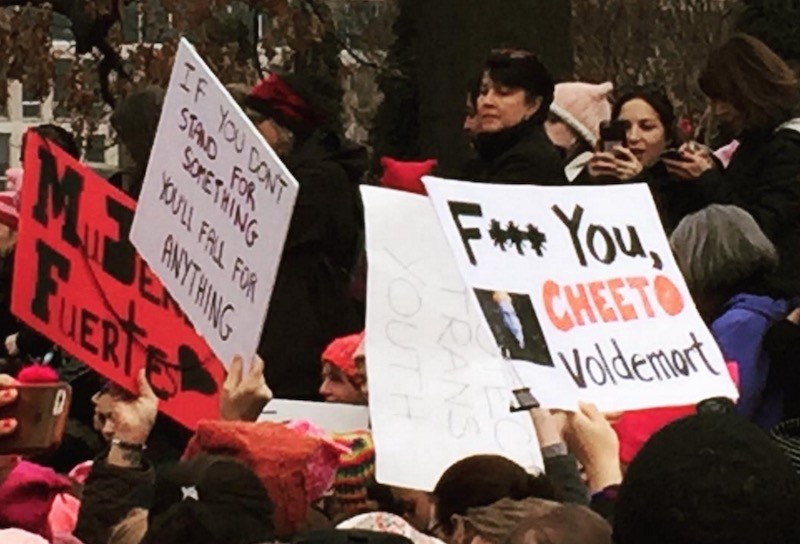 The crowd, shoulder to shoulder, stands silently for the most part, straining to hear, then, joining in as a wave of uproarious cheering comes at us from the front. The stage itself is a block ahead and a block to the left of us, at Independence and 3rd.

Midway through a roar of applause I whisper to the woman standing on the other side of me, "What did she say?" Her whooping is only partially interrupted to gesture silently "No clue" back at me.

The speakers on stage come and go, evoking from-the-feet rumblings of the sweetness and righteousness of recognition. And as they come and go, though we hear almost nothing a few phrases punctuate through, rippling through the crowd with sincere full body "Oh HELL yeahs" and cheers from all around me. Words of potency, and power.,

”We need to become our OWN North Star.”

Behind me, a group chanting "March like a girl, march like a girl" overwhelms what little might have been discernible from the front. It gets quiet, and a ten-year-old kid, sitting on someone's shoulder yells "Trump is a butthead!!" The two thousand or so people immediately surrounding us break out in delicious juvenile laughter.

Cell service is waning. A young Japanese guy with a sharp beard and impeccable dress is on the phone near me. ”OH you're right by THAT tree?" looking just beyond us, what normally would be a 20-second stroll, is now an impassable journey. "I can't get over there dude, it took me an hour to get here. Can you hear me? Kelly…? Kelly…?”

I start thinking I ought to get back to my friends.

When I turn around, I am taken aback by the enormity of it all. Literally, I fall a half step back on my heels. What was an open thoroughfare, all along Jefferson, now jammed, shouts of demand and of mercy, lined with bouncing cardboard, colourful signs. ("A government so tiny, it fits inside my uterus" and "Fuck off Cheeto Voldemort" are among my favourites.) We are a grouping of humanity so colossal, I feel for a moment that my knees might buckle. The crowd stretches beyond what I can see—all the way up to Madison, the Canadian Embassy beyond it still. 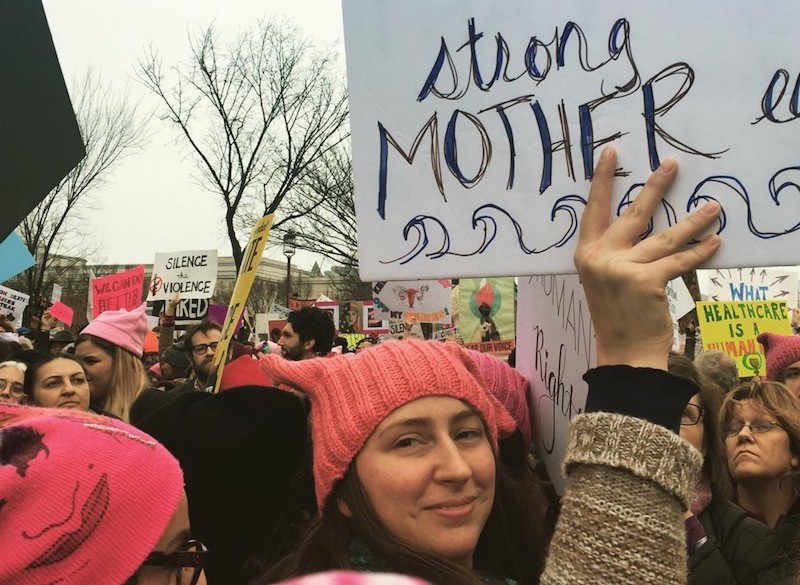 I’m alone. Just me and my tiny transparent backpack with iridescent straps and the message "We are friends" on the label. Ordered specifically for this event, it looks like the kind of accessory a real life Sailor Moon might wear, except mine is packed with chocolate bars, peanut butter M&Ms, a back-up cell charger and cigarettes.

As I begin to weave through the crowd, I am stunned by the gentleness of movement. It isn't like sneaking to the front or even back of a rock show—no one is looking at me with that "Oh you think you can just fuckin’ walk out of here, do you?" look. Instead is something I never could have anticipated, and more, what I'm sure I've never seen before. Slow, curling grins, slow clear eye contact, and tender side-stepping to make a centimetre appear, so I might just squeeze through.

There is no hostility. There is no animosity. There is only warmth. I feel as though I am weightless and strong, a flying spirit drifting through a weave, meeting kin, these faces, these eyes…some of them finding mine, as if we had known each other since childhood, and though our paths diverged, maybe upon this re-encounter by chance, we finally understand each other. As I pause and step into the openings as they appear through this crowd, zig zagging alone, onward and onward, each person, appearing before me, each sign, hat, hand, like a vision in a summer afternoon dream, bending before me like the tender drifting reeds of the river.

Finally I reach an opening, almost fall into it, after what must have been a full hour ducking and weaving through the thousands. I stretch my arms out doing a ridiculous kind of Donkey Kong dance and the women around me laugh and joke.

I linger for a moment then press on, the Capitol to my right, the Washington monument disappearing in fog to my left.

There are little groups back here, Sikhs for Peace, Jews for Women, queer lovers dangling from each others arms, lipstick in the most fashionable shades. Every time I see an elderly woman I am astounded: Though I nearly sent myself into a natural high-induced, aided-by-low-blood-pressure fainting spell, these women—their curled white hair, their thick-soled sneakers, their canes and sweaters, leaning sometimes on the arms of daughters—they are smiling.

They don't look exhausted. They look like they've just seen an angel. Like they've just seen a light so bright they can't contain their own radiance. And the women helping those elderly in the crowd, those pushing wheelchairs, wearing expressions of stoicism and lightness, part the seas of people without an angry word spoken.

Even those who seem to be travelling through us with more urgency, don't speak out of turn. The absence of hostility is marked—and in its space a light, drifting, amoebic spaciousness.

When I hear a group of men shouting "Her body HER CHOICE" I start to cry. The strength and love here is unspeakable, unmeasurable.

I stop again, when I come to a small clearing in the crowds. Again, I've been sort of flung into it, and my cartoonish arrival sparks laughter and warm welcome from the Latina women standing there.

Everyone is beaming. Shouting. Fist raising.

From the corner of my eye, I see something scrambling up a streetlight, not 15 feet from me, though there are hundreds of bodies packed in between us. One of the women I almost just fell into sees my face and turns to see what i'm seeing. We look on, thrilled, and anxious.

It’s a little girl. She must be eight or so. She's hauling herself up a light pole like a monkey. Rising steadily, she shanks an arm up, and her tiny body shimmies up, pink winter boots following behind her. She is reaching higher and higher toward the dense cover of fog above us. The curiosity and amusement at watching her immediately turns my skin cold. Now I am frozen in panic, watching this tiny child, like a dangerous, live circus act, hooking and sliding her way farther and farther from the ground. A group of us are staring now, hands clasped over mouths, some covering their eyes.

“Jesus,” I say to the women next to me, "Jesus fuck, don't fall,” sucking in my breath without realizing it. The image of my own little boys swiftly visiting me, I am now fully gripped and overcome by fear.

Just then, at the exact moment the crowd hits its shrillest note of resistance, she's made it to the top of the pole. The little girl swings one leg and then the other, locking herself around the lamppost, and thrusts her fists in the air, victorious at last. The crowd is electric, screaming for her, in pride, disbelief and jubilation.

”Hey," my Latina friend says to me, "she could be president."

On the way home, cell service bleeps and buzzes back on in our pockets. I get a text from Dad. It reads:

Surprised to find myself in tears of hope, watching hundreds of thousands of women.
Maybe millions…marching in cities across North America.
Thank you for being there.

As sit here typing, humbled and strengthened by the exquisite beauty of goodwill in the world, I'm ready to do what needs doing.

I'm proud to be a woman today.

I’m proud to be a woman.