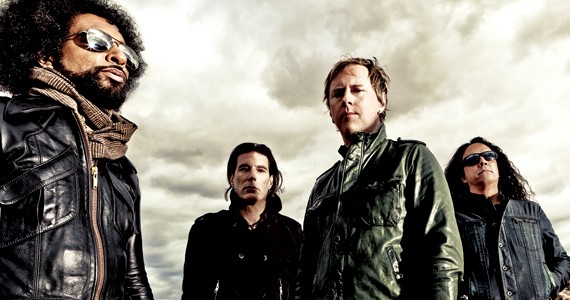 I was stoked when I saw Skratch Bastid on the turntable at a Raptors game. The Halifax DJ and producer is kind of a big deal and he's touring Canada with a party in tow, hitting the Waterfront Warehouse with A Tribe Called Quest's Ali Shaheed Muhammad, locals Jorun Bombay, DJ Gwen West, Plaeboi, DJ IV and more, plus barbeque and prizes. I bet the homie knows Drake.

Sam Roberts is a Westmount-bred South African whose six albums since 2000 show invention and skill in songwriting that, while commercial, still has loads of integrity. He plans to celebrate this Canada Day with Ben Caplan and July Talk for free! Lord, beard me strength. Alderney Landing, 2 Ochterloney Street, Dartmouth, free

The east coast's answer to Nirvana, Deer Tick was last in Halifax in 2012 and played as alter-ego-band Deervana. Around since 2007,with a Cobain-esque frontman and classic riffs, I'd say Deer Tick is some pretty good shit. If you like rock and roll with a grunge undercurrent, swim in this tide, freaks. The Marquee, 2037 Gottingen Street, 9pm, $25/$30, sonicconcerts.com

Since 1992 Travis Tritt has been a member of Nashville's Grand Ole Opry, a major achievement in country music. Alongside greats like Williams, Parton and Brooks, his old-time heartbreak country still pours from those piercing baby blues. He'll have you crying into your whiskey at the Halifax Forum. Halifax Forum, 2901 Windsor Street, 8pm, $42.50-$72.50, ticketpro.ca

Nashville Pussy has been here before, sharing its affinity for jean cut-offs, sleaze-rock and greasy haired punk-cowboys with Halifax like it's the rural roads of a Confederate state. The Marquee, 2037 Gottingen Street, 9pm, $15/$18, etixnow.com

Since the 1700s, Halifax has fostered a close relationship with the city of Boston. No surprise that seven rabble-rousers from Massachusetts love to play the Maritimes. Give me those Celtic-punk reels or give me death! Be warned that Dropkick Murphy's shows are notoriously out of control (wear shin guards). Cunard Centre, 961 Marginal Road, 8pm, $45/$50, ticketatlantic.com

Halifax-born Melanie Doane has had seven Top 40 singles in Canada since releasing her first EP in 1993. A hometown sweetheart and respected music educator, Doane has great moves, including a ukulele, a captivating stage presence and a new album, The Emerald City, which is available now on iTunes. The Carleton, 1685 Argyle Street, 9pm, $20, thecarleton.ca

Tie up your tugboat and swing by one of two nights to see laid-back Dartmouth boy Matt Mays with his catchy catalogue of regional content, gravelly voice and denim that won't quit. The Shore Club, 250 Shore Road, Hubbards, 10:30pm, $30/$35, etixnow.com

This is my concert pick of the summer: "Jump! Jump! For my love!" This Oakland trio of powerful and strong female vocals hits the Casino after major hits in the 1970s. With R&B, disco and pop sounds, The Pointer Sisters have an iconic aura of a soul-train long past, but still so influential in the present.

Everyone knows Alice in Chains, but no one seems to know a single hit. I mistake them for Jane's Addiction. And sometimes I wonder why a band like this would even come to Halifax now. Is it 1988? Halifax Metro Centre, 1800 Argyle Street, 8pm, $49.25-$74.25, ticketatlantic.com

Shania Twain is the queen of pop-country in Canada and maybe even the world. The best-selling country artist of all time began her 20-year career in Timmins, Ontario, and produced amazing hit after amazing hit. My number one karaoke choice; we are blessed to have this angel on our earth. LET'S GO, GIRLS! Charlottetown Event Grounds, 4:30pm, $79.50-$179.50, shaniapei.ca