With the highest rates in the country, Cassie Hayward thinks more education can make a difference. 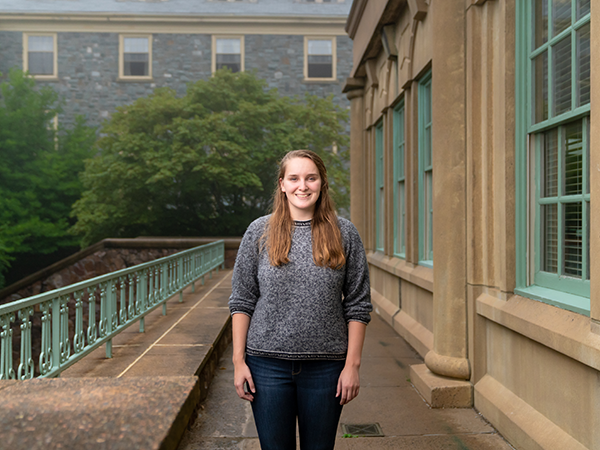 In an effort to listen to young voices when making policies, the United Nations is assembling the first global youth-led council to collaboratively strengthen resilience, food security and nutrition.

Twenty-two year old Cassie Hayward from Dartmouth is on the youth council's working committee and is helping to shape the council's operational framework. This October, she will represent Canada as she joins about 30 youth delegates from across the globe at the World Food Security in Rome, Italy.

The Youth Council formed last year with support from the Netherlands government, to collaborate with UN affliliated agriculture and food organizations to field-test a framework to defeat hunger and achieve food security for more than 130 countries worldwide. Hayward and the council are in the strategic planning stage, working to mobilize funding and form collaborative partnerships.

"We're creating an innovative model that doesn't rely on the tokenism of young people, but will hopefully be accessible to a network of hundreds of thousands of young people of every background, not just the conference hoppers," says Hayward.

Hayward grew up in Dartmouth with her single mother and three siblings. "I grew up in poverty," she says, "we grew up super food insecure for my entire life. But we didn't really talk about how bad it was because of the shame that is often attached to asking for help. Many people, including my mom, would do that comparison thing and say, 'we're not suffering as badly as other people so that makes whatever we're dealing with invalid', which isn't true at all."

After joining a local HRM chapter of 4-H—a non-profit youth organization that develops agricultural, crafting and leadership skills—as a teenager, she was introduced to the idea of food security.

In high school she began to notice the disparity in food security. She noticed some communities were very secure and others weren't and asked herself "why is that happening?"

Since starting university Hayward has been around the world from Ghana to Belgium learning about food insecurity and agricultural production. In Belgium, at the 2017 Youth Ag Summit she and a team of youth pitched a non-profit knowledge resource hub that aims to close information gaps and provide post-secondary female students in Kenya with agricultural, business and legal support through an online platform, AgriKUA. (Kua means grow in Swahili.) Their idea won a €10,000 prize which kickstarted work that Hayward still does today.

After that, she turned her attention to gender equity, the feminist movement in agriculture and the food insecurity that is experienced by local university students. Her undergraduate thesis looked at food security for students at the University of King's College for the first time ever.

Hayward discovered that students at King's were experiencing food insecurity at rates that are nearly four times the national average, with even higher rates for students who identified as being low income.

"A lot of people just don't have time for food, and also have major issues being able to afford it. If you're eating Kraft Dinner four to five days a week, that's not true food security," says Hayward.

"These numbers are shockingly high, and this is at King's which has a disproportionate amount of higher-income students," says Hayward. "I can only imagine that within other universities the numbers are much higher."

Hayward also confronted a lack of research being initiated by university administrative groups and NGOs. She came across many concerned organizations attempting to address food insecurity for students in the province but says a lack of funding restricts the level of support they can provide. She also noted that when data is collected, which she says is rare, it is often inconclusive and not representative, particularly with gender. In her own research she noted a 3:1 ratio of female to male survey participation.

The most recent data from Canadian Food Security dates back to 2009, and indicates that about 4 million Canadians are suffering from lack of access to food. Hayward hopes to gather new data with better representation of university students, youth and intersectional variables related to social justice throughout her masters degree in Global Government at the University of Waterloo. The program will keep her in touch with the issues that are informing Canadian food and agriculture policy.

In continuing her work with AgriKUA, she says she's going to explore how the Youth Council can act as a liaison between young people and policy makers. "We are designing an inclusive roadmap for youth to be doors, not windows."

Hayward says she hopes to build local multi-stakeholder partnerships to support the development of the Council's accessible youth-led initiatives and is eager to involve an even younger student demographic in the educational sector.

"Community building in general is building trust within the community," she says. "We need to validate the very real food security barriers that families and students suffer within Nova Scotia, in Canada and around the world by not normalizing the poor student narrative."

She's continuing to work at food security and equality during her studies and exploring bringing the educational potential of AgriKUA to Canada. To get youth involved in the processes around their food, she says that first "we need to avoid the trap of normalizing food insecurity as a part of student lifestyle."

She sees big potential in bringing the program and therefore more awareness to high school students—a way to inform and educate before students get to university and experience food insecurity on their own.