NS gives more details on who gets vaccinated in Phase 1

On Tuesday, Stephen McNeil and Robert Strang gave more details on how the vaccination program in Nova Scotia will roll-out.

“We will have a distribution network quite frankly, that I think will be the envy of the country,” McNeil said.

Public health is working with Doctors Nova Scotia and the Pharmacists Association of Nova Scotia to set up new models of clinics, but Strang said those details are still being worked out, and the clinics will likely never look like the flu shot clinics we’re used to.

“We’re actually working out a prototype of a pharmacy-based clinic and how a pharmacy could support that. Also a primary-health care type clinic,” said Strang.  “But we’re not, certainly, in Phase 2, envisioning that we would be giving out Covid vaccine to every single pharmacy, every single family doctor’s office, there’s too much wastage around that.”

But the province did recently get permission to ship the Pfizer vaccine thawed, which Strang said is a huge benefit for long-term care homes and vaccinations moving forward.

“Previously we were having to hold the Pfizer product for use only at our cold storage sites and the associated hospital clinic, now this is quite a game-changer,” Strang said.

The government says age is still the number one factor that will be used to prioritize vaccinations once Nova Scotia reaches mass distribution, despite the fact that health groups—like those suffering from asthma or other lung problems—have been trying to lobby the government to move up the list.

“We do recognize those concerns, but we have to understand that by far the biggest risk factor for severe disease hospitalization and death is age,” said Strang, adding that because this info is more easily available, “it will actually allow us to move more quickly through the population.”

In a technical briefing with reporters on Tuesday, an expanded list of Phase 1 groups included paramedics and other designated medical first responders, healthcare workers in correctional facilities, midwives, and community primary care workers like nurses and doctors who are seeing patients in person. Phase 1 also includes establishing prototype clinics in First Nations and African Nova Scotian communities, and the first community clinics for those who are aged 80+.

Also included are healthcare workers at correctional facilities, but incarcerated Nova Scotians at those facilities will have to wait until Phase 2. At the technical briefing incarcerated Nova Scotians—unlike health care workers working in correctional facilities—were lumped in with people living in congregate settings, even though, according to a report from the Prison Pandemic Partnership, 80 percent of reported COVID-19 cases linked to prisons and jails were cases where incarcerated Canadians were the ones getting infected. 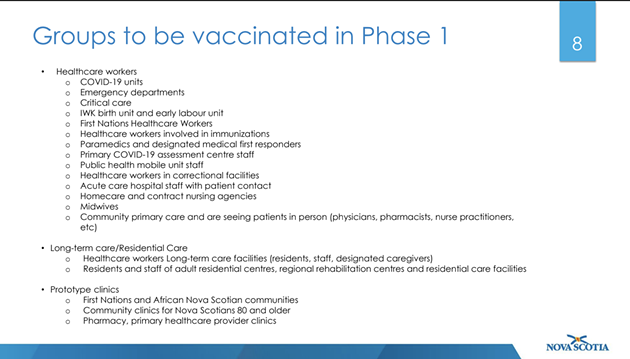 Over the coming months, public health will use a combination of contacting people through letters and calls from MSI, as well as using immunization booking service CanImmunize, to get Nova Scotians signed up for their COVID-19 vaccines.

“We’re developing a number of mechanisms for ways that they’ll be alerted when their age cohort is eligible to get vaccinated,” said Strang.

But while the press conference was happening, COVID-19 vaccine company Pfizer also announced there would be more delays in shipping its product to Canada.

This means the number of Pfizer vaccines expected to arrive in Nova Scotia in shipments this week and next—5,850 each time according to the previous plan—would be reduced. By how many, the province couldn't say.

But the province’s top doc said this isn’t entirely a bad thing, because Pfizer's Belgian facility is set to close for a one-week period only so they can ramp up their production schedule.

“It’s so they can switch to another production line, and that’s all with the purpose of—over time—greatly increasing their capacity. So it’s a bit of short-term pain for a long-term gain,” said Strang.

McNeil agreed, saying “While the news may seem disappointing, rest assured that here, we are looking for when that gets ramped up again.”

But those delayed shipments to Canada will affect how quickly we’re getting needles in arms, at least in the short term. “This isn’t ideal, but we have planned for this type of scenario. And I want to ensure Nova Scotians that we are developing flexible processes,” said Strang.

Strang said that by March the shipments should be back on track, with the province set up to receive almost 80,000 vaccines that month.

McNeil, however, said the vaccine program in Nova Scotia may take until the summer to be back on track. “I think by June we will continue to vaccinate the number of people that we thought we would in December,” he said.