How to deal with the media while running for city council

Some helpful suggestions to all HRM candidates (and councillors) for when those pesky reporters stick a microphone in your face. 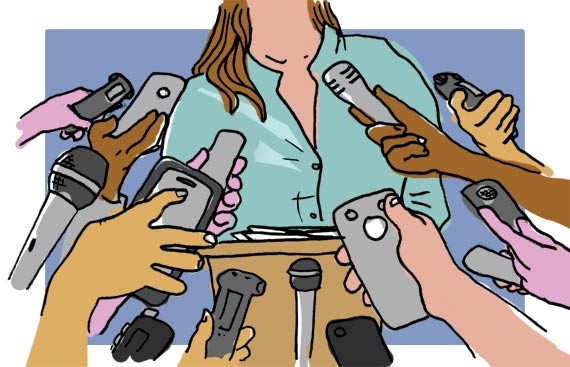 So, you're a candidate for council in this year's municipal election. Now what?

If you're running for public office, or are already in there, getting attention is obviously a necessary part of the game of politics. No doubt you will be receiving advice—and some of it will be lousy—about the fine art of media relations.

Such guidance may include recommendations about that dreaded "messaging" politicians love to use, and might warn candidates about the "ambush" interview. Then there's the councillors' habit of trying to identify and promote "good news" stories.

I have covered a few municipal council sessions in my day. My first was in the Region of Peel, outside Toronto, in about 1985. My last city hall assignment was in Halifax in 2014. At various times, I was the city hall reporter for the now-defunct, Dartmouth-based Daily News and The Chronicle Herald.

Once, at Halifax City Hall, the city manager of the day lost his cool during an entertaining session and essentially challenged a fellow municipal employee to step outside the council chamber. Workplace peace prevailed.

Sometimes, shining moments of competency would arise when council participants and observers might perhaps least expect them.

Such impressive work by capable elected representatives or city staff stood out, because much of the time at these meetings is spent (as a city hall reporter) listening to those councillors who love to hear the sound of their own voices.

In Nova Scotia, candidates for local councils have until September 13 to file their nomination papers and officially place their names on the ballot for the October 15 election. If successful, the next cohort of elected representatives will, among other things, have to deal with pesky reporters seeking information for the news sausages they'll be grinding out regularly.

Experienced municipal affairs reporters know not all stories stemming from a council session need to be found in items on the meeting's agenda, so elected folks must be prepared for council-day queries unrelated to the issues debated.

Indeed, there's nothing wrong with a journalist breaking the routine of covering municipal matters and stretching the boundary a little. Such crucial issues as homelessness, child poverty, affordable housing, race relations, the environment, accessibility and unsolved murders can—and should—be tackled at city hall.

Here's some more free media relations advice for election-campaign neophytes hoping to win a council seat in Halifax or other municipalities in the province:

1. Relax. Almost all reporters I've worked with were not interested in "ambushing" a city councillor or making that representative look bad. We're gathering information—news that's good or bad—to help educate our audiences, who, after all, are local residents, neighbours, taxpayers and voters.

2. Forget all this staying-on-message crap. And spin: dispense with that, too. When you're being interviewed by a journalist, just be yourself. Think for a moment about what you want to say, then answer all questions directly and sincerely and use plain English.

3. Try to be as accessible as possible to members of the Fourth Estate. Dodging phone calls and emails, returning media queries a day past a reporter's deadline, or later, can end up biting you in the rear end.

4. If you feel you've been caught unprepared, simply inform the scribe you'll get back to them after you've gone over the material.

5. Don't whine about being called by a reporter at home, or after business hours, or during meal time, or on a weekend or in the middle of the Christmas-New Year break. These bad-timing phone calls are unfortunate, but they come with the territory. Most phone interviews can be done in a few minutes. (We're not talking about the clock-breaking speeches of Cuba's Fidel Castro here—questions and answers relating to trash collection or traffic headaches tend to be relatively brief.)

6. Find a friendly reporter, someone you can develop a solid, mutual-trust working relationship with, and give that person the occasional exclusive. The other city hall reporters will be temporarily ticked off, but all's fair in love and journalism.

Having said all this, I wouldn't run for a council seat if you paid me a million dollars. So take the aforementioned suggestions under advisement, as lawyers like to say. And godspeed.