Little Girls at the Paragon 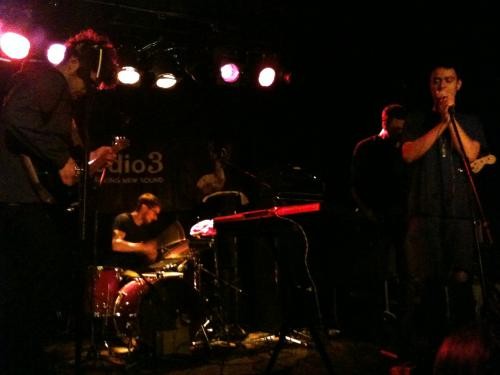 My excessive drinking came in handy last night. Standing outside the Paragon I ran into two of my old bartenders from Toronto. As luck would have it she knew leading man Josh McIntyre from Little Girls. I didn't know much about the band except the unbelievable hype the group has fostered, but we were introduced just before someone came out to tell him, "Uhh, Josh. You're supposed to be on now."

Their set was fantastic, and a perfect jump start to what had been a thus mediocre start to the evening. All dressed in black, Little Girls delivered a brand of post-punk like it was 1979. Notable was the delay effect on McIntyre's mic. I chatted with McIntyre afterward about post-punk and the echo (the interview didn't record but feel free to check out this short interview to get more background info).

The importance of the haunting effect goes back to the formation of the band as a solo recording project. Just as he tried the name the project something ambiguous, McIntyre from the beginning wanted to bury his vocals in the mix to highlight the music and keep himself removed. Of course, given the immediate hype after he released the early solo tracks, McIntyre can no longer hide himself in the project. Earlier in the week he gave six interviews in New York City during CMJ, and he admits the project has changed somewhat and he's embraced the popularity. That's something apparent if you check out this video below where McIntyre flops about stage Ian Curtis-like before flopping to the ground at the end and walking off stage (there's another related video from earlier on in the set too). The crowd was light at the Paragon, but I expect next time Little Girls come back you'll be hard-pressed to even get a ticket let alone a front row seat.