Julie Fader and her album "Outside In", which I strongly recommend you check out. 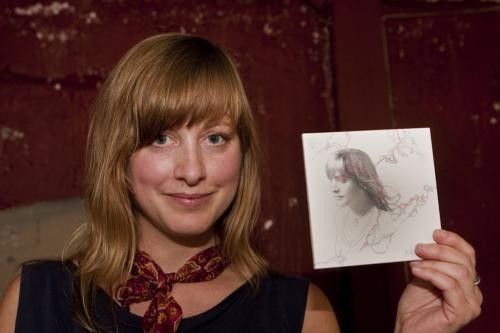 Back at The Seahorse, I had an awkward run in with Julie Fader. If you didn’t read it in this week’s Coast, I reviewed her debut album Outside In. Putting her hand on my shoulder, Fader sadly asked me, “Did you think my record was depressing?” Oh, god. She thought I didn’t like her album, I explained that while the album was bleak it was the most perfect kind of bleak. “Graham [bf and Holy Fuck-er, Graham Walsh] said it was a good review, but I was worried you though it was too depressing. Because I listen to a lot of mellow music at home. Graham gets tired of it, and I read a lot of depressing books and Graham’s always asks why I do it.” We parted on good terms after she introduced me to Walsh, who was treating Seahorse partygoers to secret DJ sessions in between sets.

By Divine Right came on next to prove they still kick ass. I chatted with Jose Contreras after the set. Check out the transcription online later today.

Capping the night were Cole Harbour metal babesicles, Black Moor. The boys didn’t disappoint headlining the Diminished Fifth Records showcase. After a furious eardrum-blowing set, I caught up with them in the stairwell (along with Mike Andrews from fellow Dartmouth band, In This Style) to find out the secret to Black Moor’s magic.