HPX Saturday preview: The Pack A.D. takes over the world

I did this extended interview with The Pack A.D. in the summer, but it disappeared into the black hole where Coast files are kept. A whole series of events happened after that and I missed the band as well, but fortunately, they're back for HPX (Saturday at the Toothy Moose, 11:45pm), so here you go. 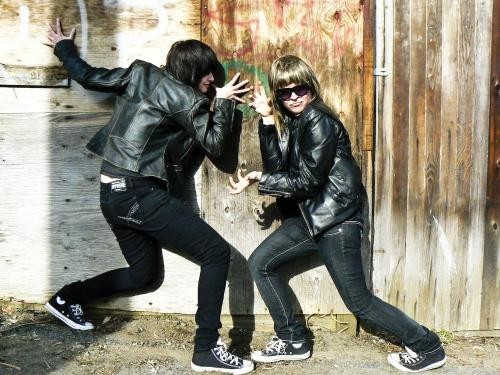 Vancouver blues/ garage-rock two-piece The Pack A.D. is, apparently, inexhaustible. Though their album Funeral Mixtape was released a year ago, they’ve been on the road since March, with the exception of one six-day break at home. “We don’t have day jobs so it’s the only way we can make a bit of money,” singer and guitarist Becky Black says, en route to Windsor, Ontario.
I ask what the strangest place they’ve played is. “We played this little town in Illinois in the middle of a cornfield, we didn’t think there was a town and then it appeared, this little town with one bar…It was a pretty good show, I guess not a lot of touring bands come through there.”