Ah, the Pop Explosion. As fun as it was heading up to Montreal three weeks ago with a slick oversized media pass and sparkly wristband, it's so nice doing this at home, where I can eat something besides pizza en route, where I'm not seeking out somebody's sketchy borrowed bike, where I don't need somebody else to tell me what band that dude blocking my view or girl elbowing my back is in, taking in the excitement in the air early in the week, when there are only a handful of industry types in suits to be found and there's still some part of me that can be convinced to actually pay money for a Molson Canadian.

The crowd was sparse at the Paragon early in the evening when local math-rockers A History Of started off, which was too bad for everyone still pre-drinking at home. These guys don't play too often, probably because guitarist Jeff Parker is in med school. They played a set of mainly material from their new album, Action in the North Atlantic, which gets officially launched at Club 1668 on November 14. They've amped up everything I liked best about their sound and gotten a bit faster and punkier, with some Shadowy Men on a Shadowy Planet-like riffs, which rule. During their last song, I noticed they all have matching guitar straps. Adorable.

Toronto's Dinosaur Bones were up next. With a little bit of attitude (but not too much), and probably some affinity for their parents' record collections, they play high-energy indie rock with a dark, heavy edge. They were, unnecessarily, giving away their EP for free at the merch table, which I was happy to pick up. Lead singer Ben Fox had an infectious enthusiasm, praising the opening act and stoked for the next two. 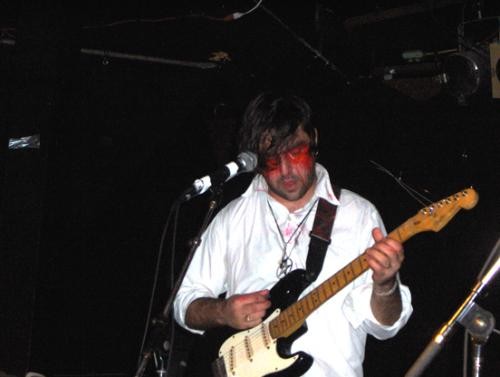 Montreal collective Red Mass got a lot of hype, but I was undecided about the recordings I'd heard. I'm decided now. This was a killer set. I wish I'd caught the band at Pop Montreal too. A collective who usually play with a dozen or so members, out of 30-40 regular collaborators, they toured with a mere four people.

Talking with a woman who billeted the band the night before, she'd offered her bachelor apartment to festival organizers last minute, then was horrified to look at the band's website and see how many people they play with. She'd been pretty happy to hear they were only playing with four people. This was the band's first show with so few people, and they'd been worried about it, but they need not have been.
A definite byproduct of Montreal's weird punk scene, playing garagey noise punk with a heavy psychedelic undercurrent, the music was sharp, and the live show crazy. Dressed up with red makeup smeared on their faces, pentagrams, and various semi-gothic attire, everyone put on a performance. And I was pleased to learn they share one of two drummers with Black Feelings, one of my favourite live bands.

Red Mass more or less laughed in the face of the guy who told them they had to finish up their set, playing just a couple more songs but drawing them out into long weird anthems, with bass guitars becoming drumsticks and the lead guitarist willfully breaking all but a couple strings, then continuing to shred those two with the guitar flat on the stage. This was not a night where people feared destroying their instruments. I like that.

Californians Crystal Antlers finished off the evening with an intense set and hyperactive audience hungry for their loud, keyboard-driven garage rock. Did I mention the girls in short shorts and Sauza tequila tank tops parading around all night and pole-dancing on the tables? One of the fun things about music festivals is all the clashes you get between venues and sponsorships and the kind of crowd that actually attends a show. I don't envy those girls their jobs. I'd rather wash dishes for minimum wage any day. The bassist of Dinosaur Bones did, though. I noticed somebody up on the table who looked more, well, clothed. He jumped up to replace the tequila women when they were taking a break and then they got up and joined him. Weird. The quasi-psychedelic number Crystal Antlers finished off their encore was my favourite of theirs. This night is going on my list of best shows I've seen this year.