The artist wants to turn a genre inside out on his debut Trespasser: “The generic tropes of masculinity and ham-fisted bar-rock is so tired to me.” 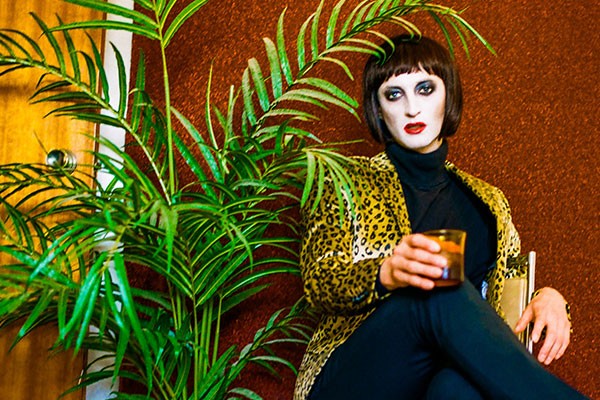 Every year Halifax Pop Explosion brings in many talented artists from all around, but this year it's got one of the most interesting and promising new Canadian artists going: Meet Art d'Ecco, a west coast-based, wig-sporting, lipstick-wearing, glam-rock musician who just released his debut, Trespasser, last week.

"I've never been to the east coast, and I'm very excited," says d'Ecco. "I can't wait to eat seafood, because I hear that's a big thing there."

d'Ecco grew up on the west coast, moving to Vancouver in his late teens, where he played in a few bands, but found little success. "I remember my late 20s and all of my friends were getting married, starting families, being gainfully employed, et cetera," says d'Ecco. "I remember saying, 'Well I've got a couple of guitars and a nagging hangover—does that count for anything?'"

Growing bored of chasing the dream, d'Ecco moved to the Gulf Islands to do some soul-searching while caring for his anxiety-ridden grandmother. Passing off "Bohemian Rhapsody" as Beethoven, he played piano to calm her nerves. Following her departure to a care home, he was left in an "alarmingly quiet" house where his nearest neighbours were the trespassing deer and eagles that flew over his home. "That old piano would just beckon to me at night—I would get so bored and pathetically lonesome that I'd start playing and I got sucked back into music in the most organic and natural way," he says of the solitary period which gave birth to Art d'Ecco.

It's that type of isolation that helped create Trespasser, constructed in a vacuum consisting of late '70s Bowie, '80s fringe culture, vintage MTV and camp. "It's a record collector's record," says d'Ecco. "There's a coldness and alienation of separation from society that the stories tell on Trespasser. In hindsight, I have trouble deciphering which ones are autobiographical and which ones are pure fabrication because there's a lot of fiction on the album and some personal stories."

With vintage guitar and synth sounds reminiscent of glam rock, the singer's soft vocals shimmer amongst theatrical songs like lead single "Nobody's Home," a song inspired by an older woman d'Ecco knew who spent her life "on the run" from an abusive ex-boyfriend. "How could someone with so much joy and happiness on the surface harbour such a dark, evil and retched past that was so unfair and unjust?" says d'Ecco.

With an androgynous sense of fashion accentuated by pale-white makeup, d'Ecco says his style is more than just a personal style choice—it's a statement. "I could easily go on stage in jeans and a t-shirt and let my neck-beard out and dial it in as a more honest, hardworking look," he says, "but I feel indie-rock and the generic tropes of masculinity and ham-fisted bar-rock is so tired to me and so part of the problem."

He hopes to engage an audience he feels isn't well represented in today's rock scene. "When it's inclusive it doesn't matter if you're gay, straight, white, Black, your level of income—it used to be the genre of inclusivity," says d'Ecco. "Rock and roll was meant to bring people together because it wasn't overtly masculine or macho. When you strip away the masculinity and aesthetics of rock and roll, you're left with a sense of danger and androgyny that makes it more appealing and more inclusive as a whole."