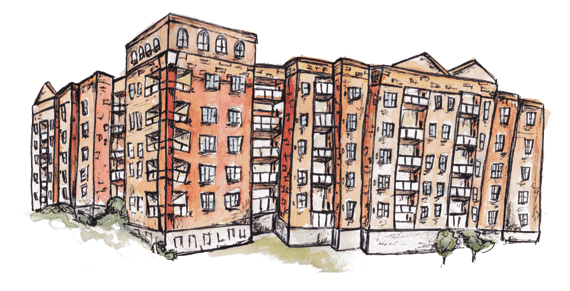 Clutch your pearls, landlords of Halifax. This week at its regular Tuesday meeting, Halifax Regional Council passed the second reading of updates to bylaw M-200, which outlines the standards for residential occupancies based on the basic foundation that people should live in a place that's "safe, warm, dry."

The long-awaited move tightens the rules around what's acceptable for rental properties in Halifax, and officially kicks off a process that will see all rental units registered with the municipality sometime in 2021.

In theory, the registry should make it easier for tenants to avoid a shitty situation by being able to see via the internet if a landlord or unit has violations and then avoiding them. But that theory really only works if the vacancy rate changes in Halifax and tenants get more choices. In the current landlord's market, where folks spend months looking for a place they can afford, renters are often forced to take whatever they can get—even if it sucks.

The registry's one part of a multi-pronged approach by HRM to do something about the rental housing crisis in this city, a not-new crisis that's the result of rapid population increase, slow construction builds, big up-ticks in long-term rentals being switched to short-term Airbnb rentals, job precarity (pre- and post-Covid), low wages, low vacancy rates and minimal incentive or intervention from either the province or the municipality to keep landlords in line.

At Tuesday's council meeting, Sergei Grbac, supervisor of building standards, was was presenting on the bylaw update. He said he had "no idea" how many rental units there were in Halifax, when asked by District 11 councillor Patty Cuttell.

Cuttell said this basic information is essential in working out how the registry will be created, and enforced. Grbac says that indeed is the point of the registry, to build up a knowledge base of how many units there are, who owns them and how many of them are above or below standard. The first challenge comes in the form of actually getting all those who operate a rental occupancy to sign up.

In 2019, on its way to calculating the famed one percent vacancy rate, the Canadian Mortgage and Housing Corporation counted 50,769 private apartments in Halifax's Census Metropolitan Area. That number, however, doesn't include any unit that's in a building with fewer than three units, any short-term rental units, or any basement or backyard suites—which Grbac said would all be counted in the incoming registry.

The data collection is also supposed to allow HRM to take a proactive approach to inspecting properties. Grbac told council that'll help with the very real concern that filing complaints against landlords can lead to consequences like raised rent or eviction for tenants.

District 4 councillor Trish Purdy wanted to know that once the registry was in place and the standards were raised and started being enforced, HRM wasn't going to be deeming units inhospitable and then just leaving tenants with nowhere else to go.

"I think it's better to live in sub-standard housing than to be forced on the streets," says Purdy.

If a bare-minimum approach to the rental housing problem itself has the potential to make things worse for renters, then indeed a crisis—the stage in a sequence of events at which the trend of all future events, especially for better or for worse, is determined—is upon us.