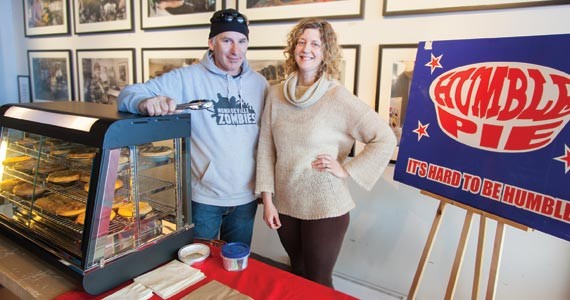 Move over pizza slice, step aside poutine: meat pies are hitting the streets of Dartmouth. Humble Pie Kitchen has been selling New Zealand-style meat pies at the Alderney Farmers' Market for over a year now, and owners Shauna MacLean and Denise and Mike Noakes have pie-in-the-sky hopes for the pastry-encased street food in Nova Scotia.

"In New Zealand you can just get a pie, anywhere. You go to the corner shop, it's a staple, it's like getting a slice of pizza," says Denise. Originally from Dartmouth, she moved back from New Zealand with Kiwi husband Mike three years ago after living south of the equator for over 16 years. She says the reasoning behind the business is simple: Mike missed his pies.

In New Zealand, it's not only the toilets that flush backwards—pies are eaten with your hands walking down the street. And bacon and egg pies are served for dinner, while steak and cheese pies are perfect for breakfast, "especially if you've had too much fun the night before," says MacLean. There are even yearly nationwide competitions for the best savoury pie. If the filling oozes out in the competition, you lose—it's all about portability and ease of eating.

"Pies are, especially coming from Nova Scotia, something you eat at the dinner table," says MacLean. But Humble Pie Kitchen is challenging tradition and coaxing people to toss away the utensils. Pot pies, tourtières and slices of fruit pie typically dissolve into a delicious mess on your plate, but not Humble's pies: their five-inch confections are destined to be eaten on the run.

While they do provide knives and forks at the market for the faint of heart, Mike calls the utensils the "Canadian into-face kits," and encourages diving in face-first. "The idea is to eat down to the middle as much as possible, and then out to the sides," he says.

It's all about the meat and cheese at Humble Pie Kitchen: "We don't fool around by putting a lot of vegetables in there," says MacLean. There are at least five different meaty treats available including mince and cheese, chicken cranberry camembert, beef and bacon Stroganoff, donair and steak and cheese, which is the classic New Zealand favourite.

Slowly but deliciously, Humble Pie Kitchen is getting the word out. The operation has recently moved into a space at 77 King Street—the corner of King and Ochterloney—in Dartmouth, where the team has big plans for its new production kitchen. During the first year, they were baking all the pies in the kitchen at FRED. and are now pumped to be in their own space cranking out the crust.

The most exciting upgrade? The industrial dough-sheeter.

"If you've got arms that have been destroyed by a rolling pin," says Mike, "a dough-sheeter is a very exciting and sexy thing."

Humble Pie Kitchen will continue selling pies at the Alderney market, and its enticing smells will be wafting over Halifax Seaport Market in the near future (once renovations are complete for the food vendors upstairs). The trio also hopes to sell the pies curbside from its King Street location.

The three are passionate about creating more pies, but keeping the quality homegrown. Currently, they produce 80 to 100 every Saturday for the market, but with the new kitchen, they hope to be producing upwards of 500 pies weekly. With a new oven, a new market and buttery flaky pastry, the pie is the limit for Humble Pie Kitchen.