Idle No Moore: Halifax gets active

Haligonian Rebecca Moore was one of the initial organizers. 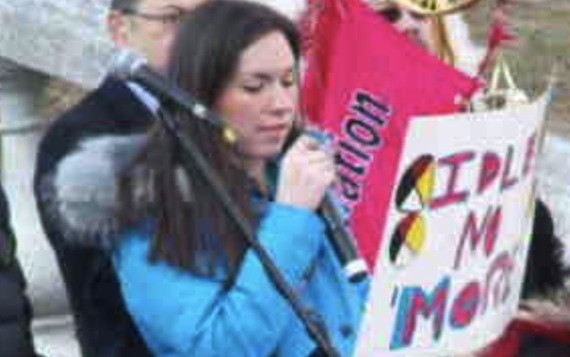 Rebecca Moore
Idle No More has gained international attention, and the burgeoning movement also has a strong presence in Halifax. Rebecca Moore of Pictou Landing First Nation, now residing in Halifax, is a key organizer and participant. Through her involvement with the Halifax aboriginal community, she learned of the campaign, which was started during a November teach-in in Saskatoon.

The movement is a response to the Harper government’s Bill C-45, the latest ideological omnibus bill introducing sweeping legislative changes. Of particular concern to First Nations are changes to the Navigable Waters Protection Act, which has been renamed the Navigation Protection Act. It no longer protects waterways---only the act of navigation. Oil pipelines can be built underneath rivers if they don’t interfere with boats.

“First Nations treaties protect land,” Moore says. “The water and surrounding land were promised to us. If you disregard treaties, corporations can buy these lands, including on reserves, for commercial use.” She also notes Bill C-27 – First Nation Financial Transparency Act. “They want to see the bookkeeping of every business on the reserve put online.”

Moore and a group of young women organized a December 21 rally in Grand Parade, attended by hundreds of Mi’kmaq and supporters. A week later, Moore rented a van with two sisters and a friend. They attended a rally on Parliament Hill. “We wanted to ensure a Mi’kmaw presence,” she says.

They learned of a four-day fast---with no food or water---in support of Attawapiskat Chief Theresa Spence, who began a hunger strike December 11 and vowed to continue until prime minister Stephen Harper agreed to a meeting. Moore stresses that her fast was a spiritual act of solidarity, not a hunger strike in its own right. Harper will meet Chief Spence as part of a delegation of First Nations Chiefs this Friday. Spence says she will continue her hunger strike at least until that time.

“I’m trying to stay optimistic,” Moore says. “If we don’t like what we hear we’ll keep protesting as long as we have to. When I hear [backlash], it’s not well informed. I hope our allies will share the knowledge of aboriginal history.”