Eighteen women will pitch business ideas at next week’s event. 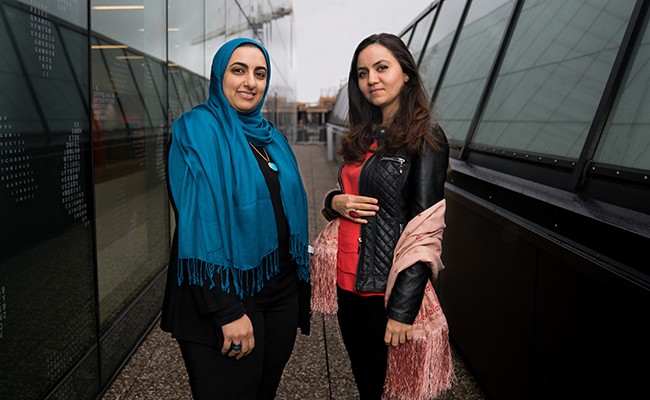 An entrepreneur workshop series and showcase is enabling female immigrants to develop and pitch ideas for potential businesses in Halifax.

Business "is a very male-dominated area," says project manager Kyla Doornbos. "What we aim to do with this project is help these women break through the glass ceiling a little bit, because whether or not they continue and actually start their own business after this, they now have the tools to understand how a company works."

The 2017 Halifax Showcase, put together by Enactus Dalhousie and Global Shapers, is the second if its kind. Last year's workshops were condensed into a weekend and focused on Syrian refugees. This year, the workshops have taken place over a month and a half, and are open to any woman who is an immigrant or international student.

Ghadeer Darwish is one of 18 women preparing to pitch her business idea. She found out about the workshop "by coincidence" while she was looking for volunteer opportunities at the Halifax Central Library.

"I think it's a great idea, especially that it's catered to women," says Darwish, who moved with her family to Halifax this summer, "and it's a great way to integrate the new immigrants to the Canadian culture and society."

Darwish left Saudi Arabia for New York in 1993, as her husband had found a job there. Since then, she's lived in multiple parts of the US and Canada—even returning to her home country for a period of time. After Darwish's youngest son had a near-fatal accident, she made the decision to move once again. Canada is an ideal place to access the physical therapy her son needed, she says, and his wellbeing always comes first.

"It just depends on what the family needs," she says. "I usually step back and take care of what they need, and then I go back and look at my career. But for me, my family is the number one."

Darwish's goal now is to open a cafe reminiscent of her grandmother's house, with Saudi Arabian coffee, treats made from family recipes and a hospitable environment.

"Baking and coffee is something that everybody in my family loves," she says.

Her business venture is just an idea, for now, but she hopes it can evolve into something more.

"I did a survey for basic information, like 'Would you come to a place that's decorated with an Arab influence?'" she says, "and the response was, amazingly, people were saying yes."

Suzan Marie, another workshop participant, wants to support women in her home country of Palestine by selling their handmade embroidered goods in Halifax.

"I feel that I can bring something that's very different, very unique from my country," says Marie, who arrived in Halifax two months ago. "It's a chance for a lot of women in Palestine to access the international market."

The workshops will be capped off with an event November 27 at the Halifax Central Library, during which the women will have the chance to publicly share their pitches.