In The Wave's deep dive

Jacquelyn Mills’ sweet and intimate documentary captures her grandmother in a delicate time. 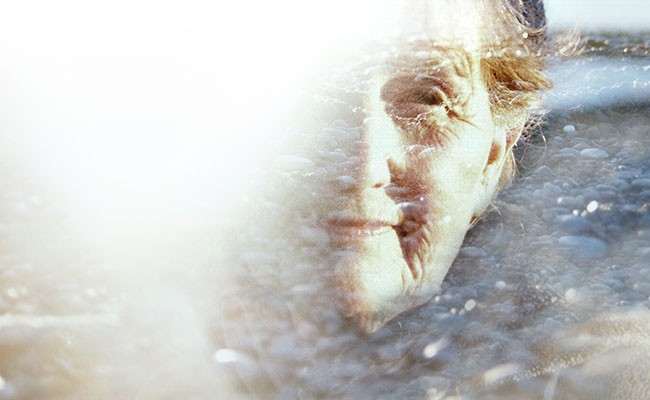 Jacquelyn Mills had been gathering research about her grandmother Joan's life, intending to make a narrative film based on her life in a Cape Breton fishing village, when Joan's sister—Mills' great-aunt—died. Everything changed.

"It seemed like an impulsive move to switch from a more fiction film to a documentary film, but it made so much sense in the moment—to take all this research I had done and use that to create this more therapeutic project," says Mills from her home in Montreal. "It made more sense for us to be together and make something together, to explore these end-of-life questions and grief. I would get to live with her and her daily life and have that precious time while she was going through this difficulty."

The resulting hour is called In the Waves, screening on Thursday, June 7 as part of the annual Halifax Independent Filmmakers' Festival. It includes some of the elements Mills had been exploring in her narrative phase—underwater photography, impressionistic scenes—threaded with footage of Joan's everyday life and her ruminations on life itself.

"I was walking down the street in Montreal and I called her and said this idea. And her first reaction was, 'No way,'" says Mills. 'There is no way you could come and film me in a documentary.' Then we got in this big discussion—I said, 'Let's experiment, let's play with it, what is it like if we explore these really big experiences, emotions and reflections. We are in charge and we can stop anytime and it can be really playful as well as deep and asking these bigger questions.' And then she got really excited."

Mills moved in with her grandparents and amassed 150 hours of footage as a one-person crew shooting with a Canon EOS 60D, a consumer DSLR. "There was no way it would ever work out," she says of having more people on the shoot. "Many mornings I would get into bed with her at sunrise and that's when we would have those discussions, that's how we would get there. If there were other people around, it would be a different film."

Joan didn't see In the Waves until it was near final cut. "Because it is so intimate and personal it seemed clear to me it might be confusing if she saw anything before it was completely done," says Mills. "Every piece needed the piece before and after for it to make sense."

Mills' grandparents are of a generation not used to constant documenting, so even though she tried to "document it quietly," the gap was sometimes noticeable. "This one morning my grandfather was making breakfast and I was filming every detail. And he said 'You know Jacky, I don't think you're gonna win an Oscar filming somebody making breakfast," she says, laughing. "I think he was worried about what I was doing with my career."

Joan, for her part, loves In the Waves. At its FIN premiere last fall, "she made this funny remark—she never thought it was gonna be shown to anybody. She understood that it was my intention and we were very clear about that," says Mills, "but I think it's a very surreal experience. I grew up with her and we are so close and suddenly there's this camera, but it still seems like us. Even though she knows it's the intention, you can't imagine that it's gonna play in a theatre."