Incredible edibles: Supreme Court decides if Canadians can get baked

Something to toke about - Part 2 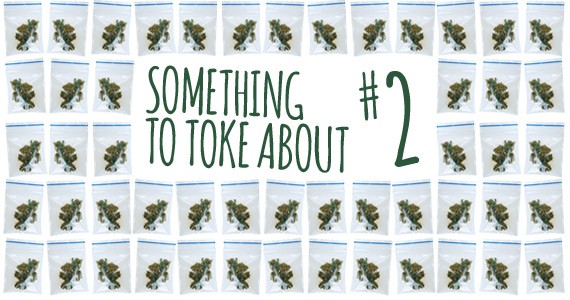 "If you want to make cookies, you're breaking the law."

Last month a batch of pot cookies made it to the Supreme Court of Canada.

Owen Smith was baking the fancier-than-average cookies in his Victoria, BC home for a marijuana compassionate club when the cops busted him. That was in 2009.

Six years later, after a hearing in March, the Supreme Court will rule on whether Smith was allowed to cook with cannabis extract. If he wins, it will mean medical marijuana users can sip weed tea or nibble cannabis cookies without fearing Health Canada's wrath.

Last week I walked down to the compassionate club on Gottingen Street to find some edible eaters. As is typical for a Friday afternoon at the Farm Assists Cannabis Resource Centre, the lounge in the back of the shop was filled with chilled-out patients hitting the vaporizers hard. A friendly dog wandered from person to person, having the time of his life.

"Edibles have been around since the dawn of basically weed," said one fellow when I ask him about consuming cannabis. But these days, edibles are getting a bad rap with Health Canada because they're easy to surreptitiously transport and consume, he explains. You might get a funny look if you're smoking a joint, but not if you're eating a cookie.

Imagine a little old lady who busted her hip, he posits. If she has a cannabis license but she doesn't want to smoke the stuff, what is she supposed to do?

"Can I interject?" another club member pipes up. "The reason it's in the Supreme Court of Canada is because Health Canada said patients are only allowed to possess marijuana in flower form, and the second you remove it from the dried bud flower state, it becomes an extract, which is illegal.

The woman points to a thin red line on her shoulder. She recently had a lymph node removed to have it tested for cancer. After the surgery, instead of using the drugs her doctor prescribed, she went home and whipped up some THC-infused cinnamon buns.

The pain-relieving benefits of pot last much longer when she eats weed treats than when she smokes it. Edibles might take longer to kick in, but it's worth it.

As you might have guessed if you read my last Coast weed column, my first and only experience with pot cookies was a disaster.

It was my first year at Dalhousie and my friend knew a guy in a Cool Local Band, so we went to their house to hang out. One of the cool band guys pulled some pot cookies out of the freezer. I ate one, and you know how the story goes: I didn't feel the effects after a few minutes, so the bright idea struck me to have another.

I think what happened next was that they played chess while I lay on the couch for all of eternity listening to the religious experience that was Pink Floyd's The Wall, on vinyl.

What I know happened the next morning was that I woke up early to go to work at Orange Julius, where I made smoothies. Let that sink in. I spent the entire morning barfing into a metal grate in the floor of the store. My boss never found out.

Cannabis is like any other drug—you can have too much. But that shouldn't mean responsible medical consumers should be barred from medicating with tea or a cinnamon bun.

And as for the sneaky nature of edibles, the little old lady is already baking pot cookies. Let her do it legally.


Mix dry ingredients together, add milk in slowly, knead and roll out flat.


Mix filling ingredients together and sprinkle over the rolled out pastry.

Roll into a log and cut into pieces. Place on greased baking sheet. Bake at 350 degrees until lightly browned—approximately 12 to 20 minutes, depending on your oven.

Halijuana Something to toke about Marijuana Justice