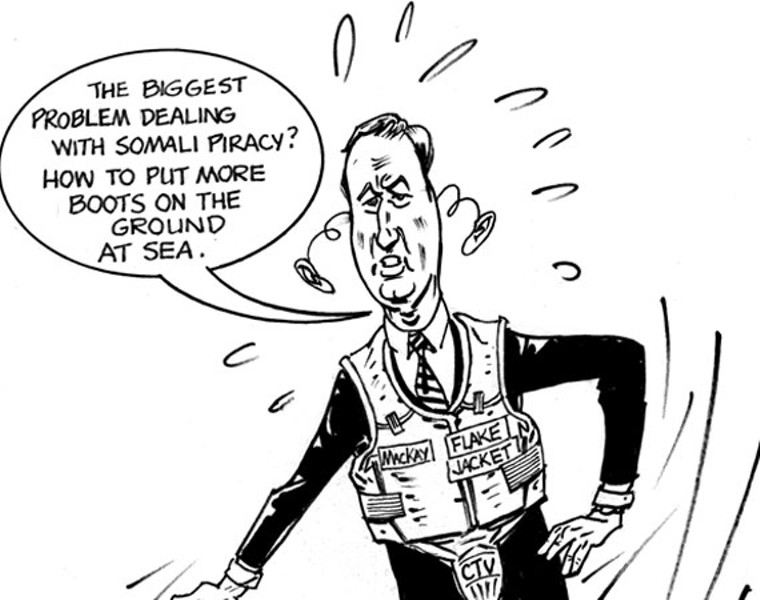 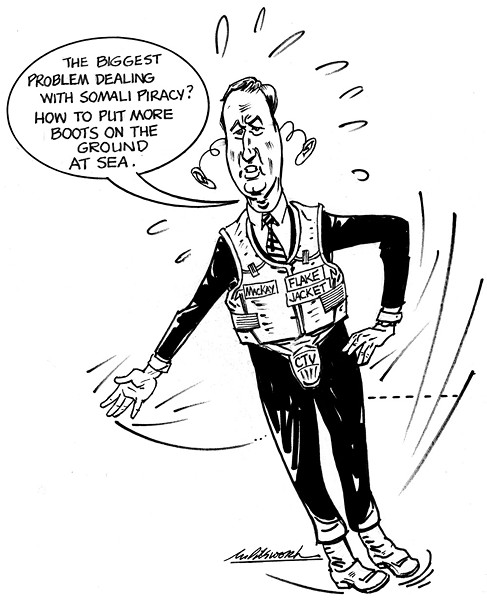 "Have you got your lanyard, sir?" inquired a security official in the lobby of the Westin hotel Saturday morning. "No, I'm media," I replied, "and I still haven't registered for the conference." The security guy made it clear I wouldn't be going anywhere without official ID consisting of a plastic card clipped to an orange cord dangling from my neck. After all, this was the Halifax International Security Forum, a gathering of more than 300 prominent politicians, military commanders, business executives, well-connected journalists and academics---all (unlike me) certified members of the trans-Atlantic power elite.

They had been brought together by a Washington-based think tank with assets of nearly a quarter of a billion dollars called the German Marshall Fund of the United States. They were there to discuss a wide range of international topics including why we aren't beating the bad guys in Afghanistan, what to do about the nuclear weapons ambitions of those pesky Iranians and how to handle obstreperous African pirates. The Atlantic Canada Opportunities Agency had generously kicked in $2.5 million of taxpayers' money to help make it happen.

While I waited for the registration desk to open, retired general Rick Hillier, formerly Canada's top soldier, breezed by, pumped my paw and said he didn't have time to talk just then, as he was in hot pursuit of a coffee and cigar. Minutes later, lanyard round my neck, I repaired to the press room where panel discussions from the conference hall upstairs were piped in. I found the one on African pirates fascinating. The panel consisted of two defence ministers, a big-eared one from Holland and our own Peter MacKay, plus an American admiral in charge of US naval forces in Europe and Africa. (There were no representatives from Africa.)

The panellists agreed it's tough for the world's most powerful navies to prevent pirate attacks in the busy sea lanes off the Somali coast. So far this year, Somali pirates have hijacked at least 35 commercial vessels, taking more than 585 crew members hostage. The panellists also agreed with MacKay that the root cause of piracy is the poverty, hunger, lawlessness and war rampant in that part of Africa. But no one blamed rich nations, including their own, for African misery. Yes, there were a couple of references to illegal over-fishing in African waters, although no one mentioned the illegal dumping of toxic wastes.

Nor did they talk about the ruinous trade, aid and development policies that rich countries impose on poor ones. Development loans, for example, that create crushing Third World debt without conferring much economic benefit and that end up forcing African governments to cut or privatize public services in order to make interest payments; one-sided trade policies that force African farmers to sell their commodities cheaply in western markets while rich countries dump cheap, subsidized food, sometimes in the form of "humanitarian aid," putting local farmers out of business; routine exploitation of African resources by western companies and the steady flow of weapons from rich countries to poor ones ravaged by war.

I rushed upstairs later to talk to Peter MacKay. The defence minister said he was proud international aid vessels were getting to Africa escorted by the Canadian naval ships already there to fight piracy. "It has literally enabled thousands and thousands of tonnes of food product to get to those war-torn, impoverished countries," MacKay said. But he didn't seem to grasp the fact that all that aid wouldn't be needed if western economic policies hadn't already guaranteed a steady transfer of money and resources from poor to rich.

And that was the problem with the conference. Three hundred of the world's most accomplished people conferred among themselves all weekend without listening to anyone else. Maybe if even one African had been on the piracy panel, he or she might have been able to speak truth to the power elite.