Inside the lines: Halifax designers to watch

The stories and looks behind four emerging local lines you should be keeping an eye on.

Victoria Eva
Victoria Kristofic's line of casual loungewear will make you want to sit on your lawn with your feet up, sipping lemonade. Inspired by a recent backpacking trip through Portugal and Spain, this clothing is made for leisurely relaxation in the sun. Having only learned to sew last year, this is Kristofic's first line. "An important thing to me is the combination of a minimal aesthetic but also having it be playful and cutesy. That's pretty key to my design aesthetic," she says. Kristofic uses natural fibres, like organic hemp lined with cotton, and accents her pieces with hand embroidery. She's been working on the collection for about a year, and showed some recent work at NSCAD's Epoch fashion show. What's next? Kristofic wants to get these babies up for sale! Hopefully, that'll be her summer project, she says.

BLKWRK
Designer and NSCAD grad Toban Ralston's collection of badass athletic wear could make Adidas check its attitude. The shirt from his line that reads "Hades is my homeboy" says a lot about his aesthetic. "One thing that inspires me is streetwear and activewear. Edgy, darker sort of stuff that can apply to men, women and anyone who doesn't consider themselves on the gender binary," says Ralston. "I did use all male models for the show, but in my head a lot of the stuff that I designed is gender neutral...I am a big believer in breaking down those boundaries." Ralston's work so far on BLKWRK combines striking vivid florals, black mesh and asymmetrical lines. His pieces aren't for sale yet, but he's open to negotiating prices.

Lemonade Stand Designs
Marie Webb and Lux Habrich (AKA Princess Buffy and Lux Sparkledust) create clothing and "wearable art" that they call a "celebration of life on the body." Their eccentric and whimsical designs are a blend of the most vibrant colours you can imagine. Lemonade Stand's products range from handwoven wrap dresses to silkscreened bathing suits. Webb, who creates many of their designs, is inspired by many things: dreams, the summer time, her friends, and, most of all, celebrations. Something the collaborators are focusing on right now is accessibility, says Habrich. For example, Webb (pictured), inspired by her own disability, is interested in designing clothing for babies with Down's syndrome (who are at times challenging to dress because of their low muscle tone, she says). In general, the pair says they're at a stage of experimentation, but colour and inclusion are always at the forefront of their designs. 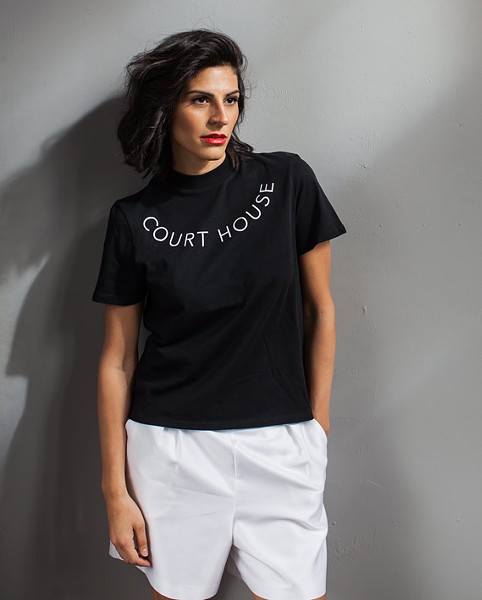 COURT HOUSE
Court House is a brand-new line of t-shirts, tanks and hoodies that launches this week. Its creative director, Sasha Court (pictured), describes the clothes as minimalist athletic pieces that you can wear in a chic way. The brand is Court's first undertaking in fashion design. As a full-time engineer, she'd been looking for a creative outlet for a while, and this venture kind of came by surprise. As for the designs, Court describes them as authentically her. "They're things that I like the look of. I like clean lines, symmetry and to build a look that's more basic as opposed to wearing statement pieces." Court will be launching her line at FRED. on Friday, April 29. Clothes will be available for purchase, with prices ranging from $25 (tees, tanks) to $70 (sweaters).