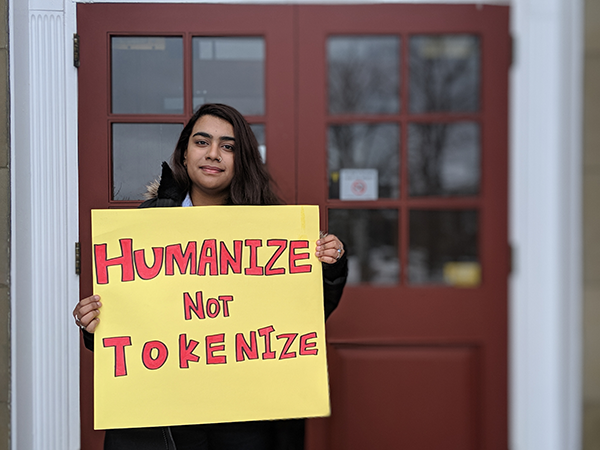 "Regardless of the high tuition we pay," says Tabasa Shimada, "we still receive the same education." Shimada is a fourth-year political science student from Toyko, and the vice-president external of Dalhousie's International Students Association.

Shimada organized the rally that marched from Dal's International Centre to deliver more than 1,000 signatures protesting the increase to administration last Tuesday.

University administration defends the increase on the grounds that Dalhousie tuition is still lower than comparable schools. (Western University, for example, charges international students $25,666-$28,743 a year.)

Faiza Nauman, a third-year biology student from Saudi Arabia, chose Dalhousie in part for the ocean, and in part because she couldn't afford the ocean on the west coast. "If I was one of the students coming in, in fall 2019 semester, I wouldn't be able to afford this university," they say. "And it's so sad to think that I wouldn't have been able to come."

Both Nauman and Shimada plan to stay and work in Nova Scotia when they graduate.

Shimada and other students went to three of four consultation sessions for the budget, protesting the hike and asking for more supports from the university, like culturally informed counselling and mental-health supports. She says, "things like that get turned down because the International Centure"—where Shimada works—"does not have the capacity."

Dalhousie spokesperson Janet Bryson says the new budget also allocates $700,000 for supporting international students. If enrollment keeps its pace, there will be 500 new international students next year, which will put an extra $718,500 in Dal's pocket for 2019-2020. But the following year, the proposed increase will bring in an extra $2.9 million, and even more in subsequent years.

The budget will be voted on by the Dalhousie Board of Governors on April 16.