Is Halifax a good city to be single?

Depends what you're looking for, say our readers. 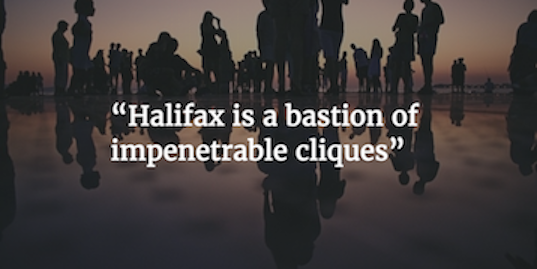 Are you looking for true love, or just a good time? Depending on the answer, Halifax is either a great or terrible place to be single. Dating in this city can be a breezy bacchanal of sexual encounters with an interchangeable roster of gorgeous twenty somethings straight out of a CW drama, or an incestuous cesspool of exes and fuckboys where every new year brings you one more circle down the drain of being forever alone. You be the judge.

“If I was single now, I would find Halifax to be a great spot. The women are beautiful; there is a very active social atmosphere; great variety of women in terms of cultures and interests.”

“An always changing population due to military and students always coming and going (and other seasonal jobs).”

“Halifax is a small university city so there's always stuff to do during the school year and even when students aren't around in the summer there are still things—although a bit less—going on in the city. It's small enough so meeting people is easy but that's also kind of a bad thing too: you can exhaust the dating pool more quickly as well.”

“It appears that Haligonians have no idea what to do when it comes to their sexuality. Apparently it is a very negative thing to be sexually liberal, but it is also a very negative thing to be sexually repressed. People seem stuck in limbo and have no idea how they can act upon their sexual desires without being judged. Dates just end up being weird. Everyone knows everyone, and if you haven't slept with someone, your friend or friend's friend or cousin or sister's boyfriend's sister has. Somehow, friendcest just becomes normal after a while here, though.”

“The pool of potential suitors is so much greater here. I never feel like I'm going to run out of guys to date. Everyone is your age and in the same phase of life as you. That doesn't happen everywhere. Halifax is also a city that seems to always have something happening. I never feel like there's a shortage of things to do or places to go. There are so many date options, you almost never have to do the same thing twice. The drinking culture of Hali also kinda helps the whole single scene.”

“People assume if you're single you shouldn't be. It's really weird. People here would rather be in a shitty relationship than try learning to be happy alone.”

“It's good for young students. The city has a SURPLUS of cute 22-year-olds. The older you get in Halifax, the harder it is to meet people because everyone has moved away and those left behind are in relationships.”

“It's small enough that you see some of the same faces in different contexts, so it makes it easier to meet strangers (although this can also be a downside, if things get awkward with someone).”

“I think it's a great city to be single in when you're a student, but once you're out in the ‘real world’ it becomes a way worse city for that. Lots of great places to go treat yourself when you're feeling down though!”

“As a woman, there is a lot of competition. Plus a fresh crop of naive 18-year-old freshman every September. The men my age are either married, or as far away from marriage as humanly possible. Grown men with the minds of 14-year-old boys. Halifax is small, too. Everyone you meet has fucked at least one of your friends. Or had a finger in there.”

“Everyone knows each other in the same demographics. ‘I met a cute guy!’ ‘Oh yeah, I dated him and my friend hooked up with him and this other chick I know saw him on Tinder and he's in my friend’s bio class.’ Suddenly you know way too much about the person way too early and it's weird.” “Everybody seems to be connected in weird ways, making easy conversation starters. Big fan of the openness to polyamory/open relationship statuses.”

“There are very few venues for single people out of school who're not into drinking. Halifax needs more singles events other than the ones on Valentines Day.”

“Not enough places to meet people organically once you've graduated from school. It feels like the only option is to go out to bars and that just isn't what I'm looking for!”

“No. It's not big enough to meet any queer guys I haven't already met from working at Menz for two years.”

“Depends on your demographic and gender, but Halifax generally stinks for long-term mates. For one-nighters and short-term flings, if you don't mind a host of emotional bullshit, Halifax has you covered.”

“Girls over 30 have lost their confidence and go for douchebags, thinking they better cling to something. Then they get hurt and are no good for the next.”

“When I lived in Halifax, I always felt alone unless I was with friends. Even when I was in a relationship. When I was single, I found that meeting people was miserable. I found most guys and girls to be judgmental and critical to anyone who didn't think, look or feel the same as they did. I live in the country now. Everyone is so laid back and anything goes. People don't hate on you for thinking a certain way about things. They talk about it. In short, single in the city sucked.”

“Halifax has a fantastic nightlife scene, perfect for the single Haligonian who's ready to put themselves on the line for love or lack thereof. For those who would rather coffee dates and sober brunches, we have a unique array of private coffee-houses, espresso bars and diners to perfectly accompany those awkward first-date silences.”

“As a gay man, when I was single in Hali it was depressing. Other city's have such large gay populations but Halifax is a small community where everyone knows everyone. The majority of the good looking men who have their heads screwed on right are taken already.”