It's quite easy to get RCMP and HRP memorabilia online

Nova Scotia’s most recent massacre was committed by a man who has been described to have an “obsession” with policing. Across social media, there are many more with the same obsession who fit a similar profile: middle-aged, white men with conservative values.

On Facebook, you can search “police collectors” and come across dozens of groups fuelling these obsessions, selling replica or retired police paraphernalia.

“It’s getting out of hand,” says William Roy, a long-time member of these groups while he was working on collecting items for his now-closed International Police Museum in Edmonton. He’s since left most of the groups because of what he calls a culture of “harassment and bullying.”

“There’s a lot of infighting, there’s just a lot of nonsense that goes on in there,” Roy tells The Coast.

And while some groups are American, one group with a Moncton-based admin and over 1,200 members is called “RCMP Collectors.” The same admin has a second group with over 500 members called “Canadian Badge & Patch Collectors.”

The group admin and founder doesn’t give much information about himself, but his Facebook page is chock full of anti-Islamic, Trump-supporting photos. Multiple profiles on the social media site show off photos of the admin firing a handgun, as well as a collection of police badges, uniform pieces, and a multitude of handcuffs. The photos date back to 2012 and include department-specific badges from both New Brunswick and Newfoundland.

Another group, run by a Halifax-based man, is called the “#1 Canadian Police Badge & Patch Collectors Group,” and has over 800 members. Both Atlantic Canadian groups have gone secret–meaning they can’t be found by Facebook search–after the most recent mass shooting. However, a large number of photos obtained by The Coast show a glimpse into what is being sold on these pages.

According to Roy, groups South of the border are typically managed by LEOs (Law Enforcement Officers), and badge trading is much stricter. Although many of these groups require proof that you’re an LEO to join, not all do.

“Some departments won’t even let you have their patch. The Los Angeles Sheriff's Department, if you put their patch on eBay, they send you a legal notice,” he explains.

To become a member of the r/PatchTrading Reddit page, you need proof you’re a cop. But the Atlantic Canadian groups don’t have the same level of vetting.

“Most people that do deals with both these individuals think that they are cops,” says Roy of the Halifax and Moncton-based collectors.

"At this time, this is not an illegal activity in and of itself" - Halifax Regional Police tweet this

Roy also says he tipped off the RCMP about these groups, sending a letter to Head Commissioner Brenda Lucki just over a year ago, but was disappointed to see no changes come from it.

“This stuff never always stays in a collection. It always gets bounced around, traded or sold,” he says.

A response from Nova Scotia RCMP says it’s aware RCMP insignia are collected and traded by individuals through social media and other platforms and that if those articles are used to personate a peace officer someone could be charged under the Criminal Code.

“If anyone has concerns over posts on social media, they are asked to contact their local police,” says Public Information Officer Lisa Croteau in an email.

Croteau says there are several policies in place for disposal and return of uniforms. “However from time to time, they do find their way into collector markets,” she says.

There’s an entire department, the RCMP’s Intellectual Property Office (IPO), that works to protect the integrity of the RCMP image.

“When the IPO becomes aware of a vendor selling insignia like shoulder patches, medals, service patches, etcetera and police officer identification badges, often brought to their attention by RCMP employees, they contact the vendor individually to discourage the sale of the items,” Croteau tells The Coast.

Similarly, Halifax Regional Police says it can’t persecute people for just trading badges, even if they are civilians.

“We are aware of people selling and collecting police paraphernalia. At this time, this is not an illegal activity in and of itself,” says HRP Public Information Officer John MacLeod via email.

Under Section 130 of the Criminal Code of Canada, however, Impersonating a Police Officer is a crime.

Anyone who “uses a badge or article of uniform or equipment in a manner that is likely to cause persons to believe that he is a peace officer or a public officer,” can be sentenced to up to five years in prison.

But RCMP say it’s not the ownership of the item itself, it’s the intent behind it that is covered by the Criminal Code. “It focuses on the person’s use of the items “in a manner” likely to create/cause the public’s belief that the person is a police officer,” says Croteau.


Barely two weeks after the shootings, on May 4, Halifax police investigated an incident of a man identifying himself as an HRP officer and claimed to be monitoring trails during COVID-19.

“Neither Halifax Regional Police nor RCMP had officers in the area at the time,” said HRP, describing the man as in his 50s, white, and wearing a black baseball cap with “RCMP-POLICE-GRC” written on it. The next day, HRP said it’d identified the man, and that the investigation is ongoing.

MacLeod says he doesn’t know how civilians get a hold of official police paraphernalia, as HRP has policies that “include measures for turning in, de-identifying and disposing of surplus and damaged items.”

But it’s increasingly easy to obtain these items, and not just in Facebook groups. Popular sale sites eBay and Kijiji have RCMP memorabilia for sale across Canada.

Over on Kijiji, there’s a $600 set of “rare” RCMP cap badges for sale in Mississauga, and sellers with over 40 listings of various patches from all across the country. Most items are described by sellers as “obsolete” and having “no authority,”  but closely resemble the real thing.

“Back in the day, you actually had to write a letter to the police department to get a patch, you know, and that's how you obtain them,” says Roy.

Roy says many of the badges and patches being sold are good reproductions (AKA fakes) crafted in large quantities overseas, but the average civilian wouldn’t be able to tell the difference. 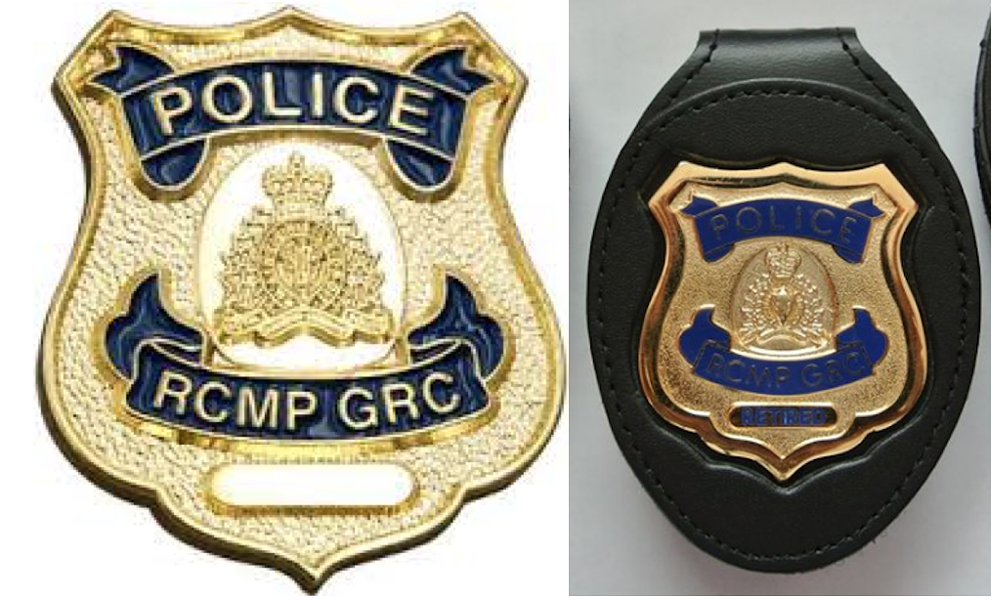 And though it’s illegal to impersonate a police officer, admiring and respecting them is encouraged. There are even three official RCMP gift shops: rcmpgiftshop.ca, themountieshop.ca, and the Heritage Centre shop. They don’t sell badges or patches, but they do have a collection of police-branded belts, cufflinks and dog tags.

And for $85 from the RCMP Heritage Centre “your little ones can now dress up as their favourite Canadian superhero” in their own serge uniform. The notable red jacket, black boots and wide-brimmed felt hat look dates back to the 1870s, a nod to the British Army’s red coat, showing off Canada’s ties to the monarchy.

We know the gunman in Nova Scotia had all of these items and more, from the right kind of yellow reflective vest to the RCMP's signature midnight blue pants with a yellow stripe. Police say he had "multiple pieces of police uniforms from a variety of agencies," but haven't clarified exactly what. And while Roy says he never personally encountered Gabriel Wortman in these groups, he believes the gunman was in them. “He's been an active, avid RCMP memorabilia collector. Somebody for sure within, either the admins or the membership, has definitely dealt with him before,” says Roy.

The gunman also had a replica police vehicle, and three retired police vehicles he’d adorned with realistic decals. Halifax Regional Police say its retired vehicles are considered part of the municipal fleet. This means that at end-of-life, they’re discarded in the same way as buses and maintenance vehicles–by being auctioned off. HRM spokesperson Maggie-Jane Spray tells The Coast in an email that police cars have a lifespan of anywhere from three to 10 years, and once that’s over they are stripped of all valuables before being sold off. “All Police cars are stripped of emergency equipment and prisoner security barriers before going to auction to be sold as surplus.”

If equipment like radios and computers are still working, they get put in a new fleet vehicle. “When equipment is determined to be defective, it is still removed and does not get sold with the vehicle,” Spray says. However, the auction company HRM uses, Auction Advantage in Dartmouth, is responsible for removing the police graphics and decals, as well as cleaning the car.

RCMP use the federal website gssurplus.ca to sell its retired cars. “Prior to sending any vehicles to GCSurplus for disposal, the RCMP ensures policing equipment such as radios, sirens and lights are removed,” Croteau says.

The site listed half a dozen retired Ford Taurus and Chevy Tahoe vehicles available for pick-up in Dartmouth as recently as February 2020. These cars, with faded but still-visible police decals, sold for between $,1000 and $5,000. 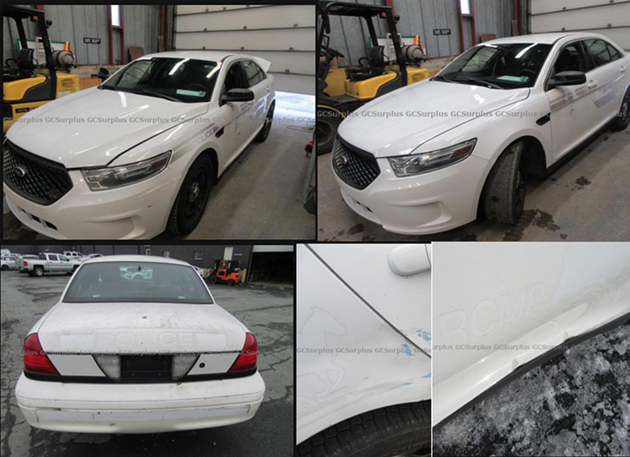 ✖i
In Nova Scotia, under section 179 of the Motor Vehicle Act, it’s prohibited to use “flashing or revolving lights on vehicles operated upon a highway,” but owning replica police vehicles and even light bars themselves isn’t illegal.

While RCMP and HRP say they are aware of these groups, trades and sales, they currently have no authority to stop it. But Roy says action needs to be taken before a tragedy like the one that occurred last month happens again.

If you don’t get a handle on it now, and you just sit back and let this stuff ride, it’s going to get a lot worse,” he says.

Roy says not every collector of patches and badges also collects replica cars and has illegal weapons like the Nova Scotia gunman, but he says the continuing existence of the groups without any regulation is worrying.

In response to the shootings, Nova Scotia Premier McNeil hasn’t ruled out that the government may strengthen regulations, but told reporters during his April 29 C-19 daily press conference that the changes wouldn’t be immediate.

“We’ll look at those details as this investigation unfolds. I want to let the RCMP follow through with this investigation,” said McNeil. “I’m sure there will be recommendations coming out of this not only here in Nova Scotia, but I’m sure nationally they’ll be looking at ‘How do we address the issue of surplus equipment from law enforcement agencies across the country?’”