The corrections officer takes over from Joan Jessome as the NSGEU's new president. 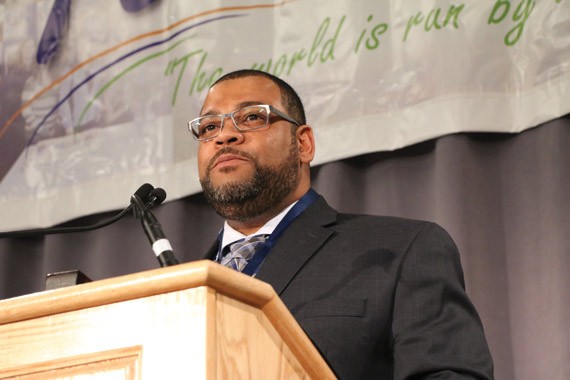 Say hello to Jason MacLean, the new president of the Nova Scotia Government and General Employees Union. The 42-year-old corrections officer was acclaimed last weekend at a Halifax convention, and takes over from former leader Joan Jessome.

MacLean is the second black NSGEU president, after Noel Johnson, who served in the 1970s. His inaugural term is for three years. The Whitney Pier native leads the biggest union in Nova Scotia at a time when the government’s austerity agenda is making life challenging for organized labour.

He spoke with The Coast about his plans for the job, and the challenges workers in this province are facing.

What’s your game plan for the next three years?
Other than executing what was drawn up at the convention, through resolutions, the biggest thing is to get members that aren’t engaged or involved with the union, engaged with the union. I want people to be proud that they’re union members. Another thing that I would really like to do is get people more involved in the political process.

Regarding the government’s austerity agenda, is that necessarily anti-worker or anti-union?
I believe it is. I believe this government would like to privatize everything—I don’t think they want government involved in giving services to Nova Scotians. But I also believe that he is anti-union, Stephen McNeil.

Looking back, why did you get involved in the labour movement?
Growing up in Cape Breton, I always heard about the unions on the radio. And it wasn’t [comments about] unions as you would hear today—it was in a positive light. When I ended up getting hired in corrections—I started in Amherst—I had people approach me and we had a union meeting. And then I just felt a pride about being a union member. Also, I had some hard times when I was 22 and [working] in the Cape Breton Correctional Facility. There were a lot of issues regarding race. It was actually the people who were active in my union that were supporting me.

The NSGEU has been in existence for close to 60 years. Joan Jessome was its first female president, and you’re the second black president. Are these developments at the leadership level significant, or not?
It’s significant, the way I started off. I was alone and then the union showed me support, and led me to believe that this was a safe place for everyone. So it was significant in my activism, but I think it’s just telling in the work that I’ve done that I became the [NSGEU’s] president. Who you become in this union in terms of getting elected really speaks to your dedication and your work more so than who you are, or what you are.

If the government can enact back-to-work legislation, or, in the case of the Chronicle Herald, private-sector management won’t negotiate a new contract, then what good is a union?
Right now, the Herald workers [without union representation], they would have gone ahead and been back in the workplace or gone to other work, or whatever. But what they do have is a [trade union] community, and they have people to rely upon. If government came with any type of legislation [in the public sector], then it would only depend on the membership’s will on where we’re going to go.