This mother-daughter force to be reckoned with lets their family legacy shine on Gottingen with EDNA and jane’s next door. 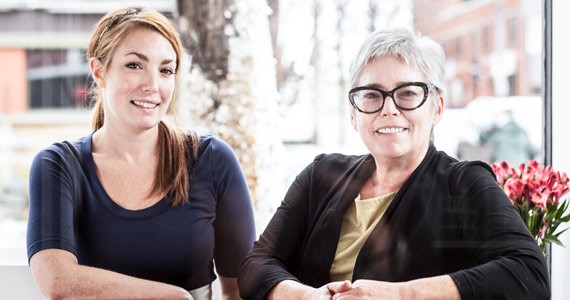 Jane Wright got her first job at 13, in grade nine, at Ernie's Truck Stop on Highway 31. "In a polyester, two-piece, blue waitress outfit with white shoes. It was $1.45 an hour," she says. Her daughter, Jenna Mooers, also started out in food service early. At 16, her first job was a Cora's.

"I worked the summer in the dish pit, starting in July. That same year in September, Mom opened jane's on the common," says Mooers. It was there at Jane's, where they worked together, that the paths they walked side-by-side as Mom and Daughter turned into one long road in the food service industry.`

Five years ago Wright bought the building where EDNA and jane's next door now sit on Gottingen. She bought it to develop the catering end of jane's, and had at one time imagined moving her beloved, now closed restaurant jane's on the common there. But plans changed.

"It takes your heart and soul," Wright says of running a restaurant, something she wasn't sure she wanted to again. "So when Jenna said she was open to the idea of trying to create something here it was just too good to be true."

"We weren't quite sure what this project would be," says Mooers. "As it developed, EDNA was born."

"I knew that Jenna would have to be the mother of EDNA," says Wright. She jokingly refers to the restaurant as her granddaughter. Restaurants are clearly in their blood, and with jane's on the common and EDNA, their legacy is pretty clear. Great restaurants run in the family.