Plus a Blondie tribute night! 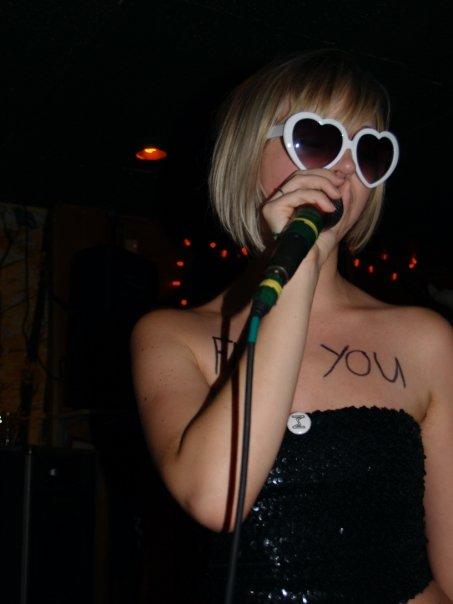 Jenocide happily bring the electro, thrash, pop, hip hop, and grrl-power fueled party to every live show, usually with comical and unexpected party mishaps. There’s no telling if you will be able to recreate singer Jen Clarke’s energy and antics in your living room, but with your very own Jenocide EP on the hifi, you can certainly try. Said EP will be released this Friday at The Paragon (with Ruby Jean and the Thoughtful Bees and roomdoom). The EP is entitled bikerides.barrettes.bruises, inspired by Clarke’s unfortunate bike accident last week. “I got hit by a car on my bike. I had the guy's tire tread on my leg; he called me a bitch,” says Clarke. “That night I went to buy barrettes.” The EP will mark the band’s early low-fi fuzzier songs, before a poppier full length is released September 26 at Gus’ Pub with A/V and guests. Clarke and Ed Renzi (drum machines, keyboards, bass) have already noticed a bit of a change in their style since the band’s inception last year. “This group of songs represents the more aggressive end of the spectrum of songs we have written,” says Clarke. “We found that our writing has become more pop-oriented as time passes, so we wanted to celebrate this particularly dirty/angsty phase before moving on to finish the album.”

Clarke keeps the weekend rolling, too. The very next night, Clarke will magically transform into Blondie at the Seahorse Tavern on Saturday, July 11 (10:30pm, $7) for a tribute night (Pixies and Weezer tribute bands are also on the menu). Clarke will perform as Ms Deborah Harry with a stellar cast of musicians (Brad MacDougall of Windom Earle/Nerd Army, Nathan Pilon of Windom Earle, Andrew Gormley of Hotshotrobot and Lyle Peterson of The Gideons) “We will be doing the hits—-"Rapture," "Heart of Glass," "Call Me"—-as well as hand-picked favorites from the first five albums from 1976-1980: S/T, Plastic Letters, Parallel Lines, Eat To The Beat, Autoamerican. We will NOT be doing one way or another, it’s one of the only Blondie songs I can't stand. It’s been overdone,” says Clarke. “This show is going to have multiple wardrobe changes and awesome rock and roll antics. All of the guys are super talented. The first time we practiced I was so giddy by how well the songs hold up live. It will be high energy, no doubt very sweaty. It will be punk rock.”