The film tells the story of the Zabinskis, who saved more than 300 people during WWII. 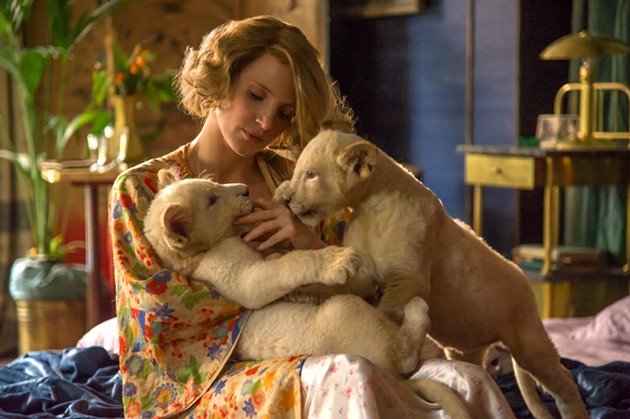 The Zookeeper’s Wife, though it has the usual WWII hallmarks of pathological Nazi cruelty—sudden shootings, a gang rape—differs from the likes of recent violence-drunk entries like Hacksaw Ridge and Fury by focusing on the human elements rather than the awfulness (by now, nearly 80 years on, we surely know). That is due in no small part to its credits—written by women (screenplay by Angela Workman, from the book by Diane Ackerman) and directed by one, Niki Caro (Whale Rider). And somehow they managed to find a woman in this whole war—the history of WWII movies is rather one-sided; see you begrudgingly soon, Dunkirk—in the form of Jessica Chastain. She plays Antonina Zabinski, who with her husband Jan (Johan Heldenbergh) runs the Warsaw Zoo. (There are many shots of her walking around just casually holding animals, from bunny to skunk to kangaroo, that provide a nice bit of levity in a mostly heavy film.) When the bombing starts, soldiers essentially move into the zoo because of their built-in armourments—fences and cages—but they’re left alone because Hitler’s zoologist (Daniel Brühl) wants to breed bison in an attempt to resurrect an extinct animal (really he’s in love with Antonina). Also, they’re using their extensive grounds to hide and then ferry Jewish people out of Poland. The whole enterprise would be unbearably stiff were it not for Chastain, one of our sturdiest and most empathetic actors, wielding her incredible jawline like a weapon itself—Antonina is often afraid, but her bravery is unwavering. The Zabinskis saved more than 300 people. The Warsaw Zoo is still open.